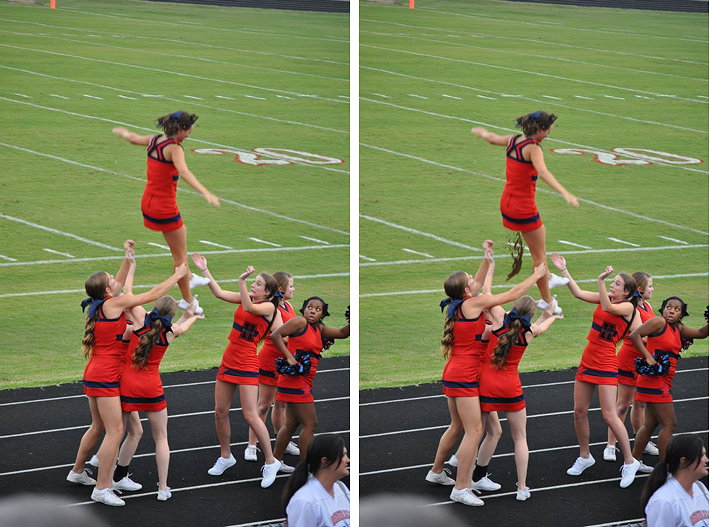 On September 30, 2014, a photo of "terrified cheerleaders" was uploaded to reddit, where it was presented as material for a "photoshop battle," in which the challenge is to creatively alter the original image.

A redditor named "totalitarian_jesus" submitted an entry titled "where will you be when diarrhea strikes?" in which he made the cheerleader appear to be losing control of her bowels in mid-air, provoking expressions of horror from her teammates below.

This quickly became the most highly voted entry, and it immediately inspired a prediction that the altered image would "definitely end up on a Facebook post accompanied by an 'omg I can't believe it, that poor girl!' type caption"

Another redditor wrote, "I have already forwarded it like it's real."

The prediction proved accurate, as within hours the fake image, now presented as a real photo, did start to circulate widely online. Many sites titled the image "Cheerleader Poops."

Seeing how widely his creation was spreading, totalitarian_jesus commented, "Is it wrong that I consider this a milestone of my photoshopping career?"

It's not surprising that the image went viral since having a diarrheal accident is a widespread fear and is therefore ripe material for urban legends. Back in 2008, I posted about the rumor of the "pooping intern" who suffered sudden-onset diarrhea so bad that she couldn't make it to the bathroom. This supposedly happened on her first day on the job.

There's also the legend of the "brown note," which is a soundwave so low that it will cause explosive diarrhea. Mythbusters tested this out and decided it wasn't real.

As well as the cheerleader hoax, I think this attempt to hit the 'brown note' is a hoax too. Well, not hoax exactly, but it's impossible to hit the _sub-harmonic_ 'brown note' when using the 20-100 Hertz _harmonic_ range produced by _audio_ speakers, no matter how big they are. In the mean time, I've read that the military-industrial complex is working on developing the _sub-harmonic_ range (<20 Hertz) into a weapon, and I suspect that isn't a hoax.
Posted by Jim  on  Tue Oct 07, 2014  at  05:28 PM
If the Cheerleader is American and sees the altered photo; who is responsible when she sues for $millions? Is the photographer responsible for causing mental anguish, even if s/he has relinquished copyright, or is it the person who Photoshopped the "shit"?
Posted by A Smithh  on  Wed Oct 08, 2014  at  04:44 AM
Did no one notice the extra leg in the group of two girls about to catch her?
Aside from the fact "spankies" are so tight and the force of a basket toss wouldn't produce that sort of shit stream no matter how explosive, clearly there had to be a third female who was cropped out.
Posted by krystal  on  Fri Nov 07, 2014  at  04:20 PM
As real as this seems, and as funny and horrifying it would be, it's Photoshopped. That would not fall out of someone getting thrown up or falling back down, let's be real. Also, @ Krystal, there is a third girl behind the other two, you can see two extra legs and part of her showing between the two others, including her arm / hand. There was no cropping her out. As for the two girls making faces, maybe this whole group just did the stunt wrong? I'm not a cheerleader so I wouldn't know, but that's just my guess.
Posted by Lisa  on  Sat Nov 08, 2014  at  07:43 PM
there is no extra leg Krystal. Look closer. There is a shorter girl opposite. You can clearly see her arm and other parts. She isn't cropped out. Just blocked by the other 2 girls.
Posted by Ed  on  Sat Nov 08, 2014  at  09:16 PM
You should remove this picture since the young girl is still being bullied over it!! Shame on you for keeping the picture up. Maybe she will sue you too...
Posted by Madcountrygirl  on  Wed Nov 26, 2014  at  08:43 AM
She has been on Steve Wilkos show and it has ruined her dreams as a cheerleader, she doesn't even want to be a cheerleader because she didnt want anymore agro. Shame on the people who did this!!!! May you get the same agro that this poor girl has had...
Posted by Tiffani Jones  on  Tue Dec 02, 2014  at  10:45 AM
The person who forwarded it as if it was real was the worst. Without a disclaimer saying that it was for a photoshop competition. She has been messed up completely, Its been forwarded more than 2 million times and she is not safe. You SUCK!
Posted by Yvonne Wood  on  Sun Jan 04, 2015  at  08:12 PM
Commenting is not available in this channel entry.