In June 1959, reports surfaced of a monster seen in the woodlands of Central Florida, near Brooksville, about forty miles north of Tampa.

Witnesses described seeing a giant creature with glowing eyes that towered over 9-feet-tall and moved rapidly through the trees with massive strides. The creature was active at night.

Monster hunters went out to search for it. Some of them were armed with guns, and a few claimed to have spotted it and took a shot at it, but no creature was bagged.

The reports aroused the curiosity of two Tampa Tribune reporters, Harry Robarts and Bob Fellows, who decided to track down the monster. They camped out for a few nights in the woods around Brooksville, but never saw anything.

Then they started interviewing locals. Finally, they got a good lead when one of these locals suggested they might want to talk to Mrs. Peggy Thomas, a young housewife who lived in the area.

The reporters found Mrs. Thomas, and when they confronted her she quickly confessed that, yes, the "monster" was her creation. 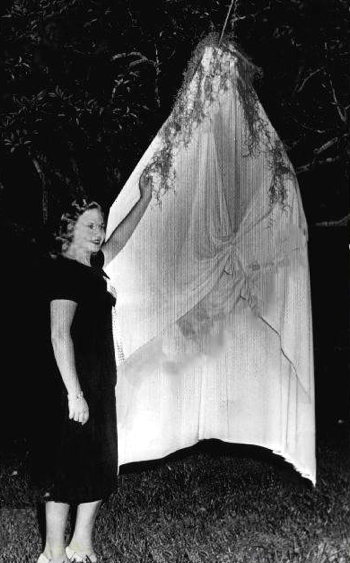 Mrs. Peggy Thomas showing off her "homemade spook".
She explained that she had created it by tying one small pinetree across another to form its body, which she had covered in a sheet. She used a cow's skull lit from the inside with a flashlight for its head. And she draped some moss over the creature for added effect.

In order to make her "monster" appear to be walking through the woods, she had tied it to a 100-foot rope between two trees and pulled it from side to side with a fishing line.

She made the creature as a joke during a camping trip with her family and was rather pleased that she had fooled not only her relatives but also many members of the general public.

The woods and swamps of Florida would eventually become known as the reputed home of the "Skunk Ape" — a large, foul-smelling, ape-like creature. However, Skunk Ape sightings only began to become common and attract the attention of the press in the late 1960s. So Mrs. Thomas's monster would not have been a reference to that creature.

Incidentally, the city of Brooksville has a curious history (in addition to its monster hoaxes), having been named in honor of Preston Brooks, a congressman infamous for having nearly caned abolitionist Senator Charles Sumner to death in 1856 on the floor of the Senate. In 2010, there was some debate over whether the city's name should be changed, but the suggestion was overwhelmingly opposed by locals.