Gullibility sometimes increases as people grow old. For which reason, the elderly are victims of financial scams in disproportionately high numbers. New research, published in Frontiers in Neuroscience, has now linked this age-related gullibility to deterioration of a specific area in the brain — the vmPFC (ventromedial prefrontal cortex). 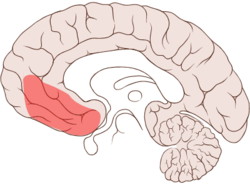 The researchers showed a series of ads to 18 patients with damage to the vmPFC. Some of the ads were deceptive (and contained clues to that effect). For instance, one ad for a (fictitious) product named NatureCure described a 'natural' pain reliever that supposedly provided headache relief "without the side effects of over-the-counter pain relievers." But a disclaimer at the bottom of the ad noted, "This product can cause nausea in some consumers when taken regularly."

The patients with damage to the vmPFC proved twice as likely to believe the deceptive ads, compared to a control group of people who had damage to other parts of their brain and a group with no brain damage.

At the end of their article, the researchers point out an interesting implication of their study — that skepticism and doubt require far more mental work than belief:


This study adds to the growing evidence that belief and disbelief are not governed by balanced cognitive processes. Belief is first, easy, inexorable with comprehension of any cognition, and substantiated by representations in the post-rolandic cortex. Disbelief is retroactive, difficult, vulnerble to disruption, and mediated by the vmPFC. This asymmetry in the process of belief and doubt suggests that false doctrines in the 'marketplace of ideas' may not be as benign as is often assumed. Indeed, normal individuals are prone to misleading information, propaganda, fraud, and deception, especially in situations where their cognitive resources are depleted. In our theory, the more effortful process of disbelief (to items initially believed) is mediated by the vmPFC; which, in old age, tends to disproportionally lose structural integrity and associated functionality. Thus, we suggest that vulnerability to misleading information, outright deception, and fraud in older persons is the specific result of a deficit in the doubt process which is mediated by the vmPFC.
The article doesn't discuss the legal implications of the study, but I wonder if it might be helpful in cases where courts need to determine whether someone is no longer competent to manage their own affairs. For instance, middle-aged children often become worried about their elderly parents falling prey to scammers, and so they try to acquire guardianship over them. However, current legal tests of mental competence tend to focus on things such as arithmetic skills, not gullibility. So a test that could demonstrate deterioration of the vmPFC might have relevance in objectively assessing if guardianship is necessary.

My grandmother, a devout agnostic, taught me that believing is always easier than thinking, but being wrong is more work than being right.

This is a major demographic, so the *important* question is how do these brain-damaged gullible people vote?
Posted by tadchem  on  Tue Jan 08, 2013  at  10:29 AM
Commenting is not available in this channel entry.