File this under Low Threshold of Belief. Several Southeast Asian news sites have recently published photos that supposedly document the presence of "extra terrestrial beings" here on Earth. For instance, the Visayan Daily Star ran a picture (below) of "Emily Santodelsis" posing with a small alien. Strangely, she insisted that she hadn't noticed the alien while the picture was being taken. She only spotted it later, when she looked at the photo. 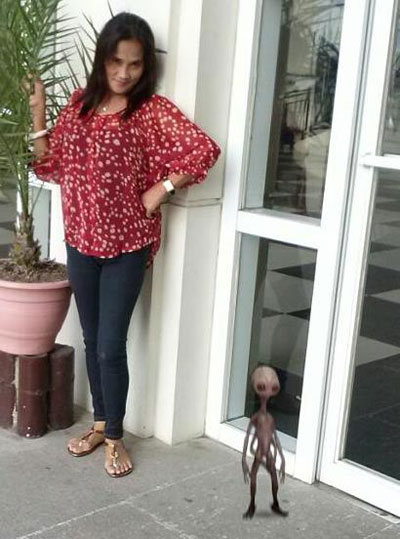 And back in January, the Bangkok Post ran a picture of an alien supposedly spotted on a beach in Thailand.

Indeed. Even if it wasn't for the app the aliens, especially the first one, look very much photomanipulated. It's reflection should be visible on the glass door, also the shadow is cast right underneath the little guy while the lightsource is to the left of the image. Finally, the perspectives don't match - he's shot straight on, while the woman in the background seems to be shown slightly from above. How the Visayan Daily Star could've taken this for true is beyond me.

The second one is adorable though.
Posted by Cliodna  in  Estonia  on  Mon Mar 11, 2013  at  12:48 AM
The second one should be a true photograph..There is news in local news channel Yesterday in India shows an alien of the same size and shape captured unexpectedly in a photograph taken by a group of boys in a smal village..The second image should be true..Dunno what these creatures are and where they are coming from..And inturn why they are soo small ..