The Pictographs of Emmanuel Domenech

Emmanuel Domenech was a Catholic priest who spent many years traveling through Mexico and the American Southwest before returning to France in the 1850s. Because of his experience with Native American culture, a librarian at the Bibliotheque de l'Arsenal in Paris brought to his attention, in the hope he could make sense of it, a curious document that had been filed away in a box there for over a century. The book consisted of hundreds of pages of strange, crudely drawn figures, resembling stick figures, many of them appearing to be urinating, copulating, whipping each other, and displaying enormously swollen genitals. It was thought to be a Native American manuscript and was referred to as the Livre des Sauvages (Book of the Savages). 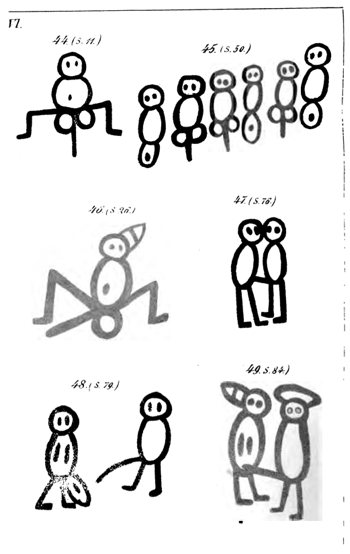 As he examined it, Domenech came to believe it was an extremely important document that revealed much that was previously unknown about Native American history and culture. He convinced the French government to pay for the publication of a facsimile edition of the book, to which he added a lengthy introduction in which he analyzed and interpreted the symbols. This work, titled Manuscrit pictographique Americain, precede d'une Notice sur l'ideographie des Peaux-Rouges, was published in 1860.

In his introduction, Domenech admitted most of the symbols were previously unknown to scholars of Indian inscriptions, but he went on to develop elaborate interpretations of them, arguing they depicted medicine men, spirits, chieftains, mystic worship, the "cult of the phallus," and even the introduction of Christianity among the tribes. However, he could not explain all the symbols. In a few places there were "alphabetic or syllabic" symbols, seeming to resemble letters from the Roman alphabet. These, Domenech admitted, he could not decipher.

Domenech must have hoped the work would be praised as a major contribution to Native American scholarship. Instead, the exact opposite was the case. When German newspapers, in particular the Vossiche Zeitung of Berlin, examined the book, they immediately recognized the "alphabetic or syllabic" symbols as German words. Admittedly, the words were often poorly spelled and written in a childish hand, but nevertheless they were clearly German. Apparently, Domenech didn't speak German, and so this interpretation hadn't occurred to him.

This led the newspapers to offer a rival explanation of the book. Instead of being a Native American manuscript, they theorized the entire work was actually the scribbling book of a German child, "the leisure pencillings of a nasty-minded little boy," that had for some reason been filed away in the French library, where it was mistaken for a Native American manuscript.

The newspapers pointed to a number of examples from the book to support their argument. For instance, one hieroglyph showed several red lines. Domenech had interpreted this as the "Emblem of lightning, symbol of Divine wrath." The newspapers pointed out that a word scrawled above the lines looked like "Wurszd," the German word for sausage. 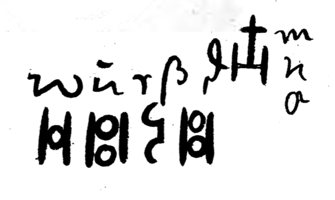 Another symbol resembled a barrel. Domenech argued it showed a barrel of rum acquired on an Indian bartering expedition. His critics pointed out that the word beneath it appeared to be "honig" ("honey"), suggesting the drawing actually showed a bee-hive. 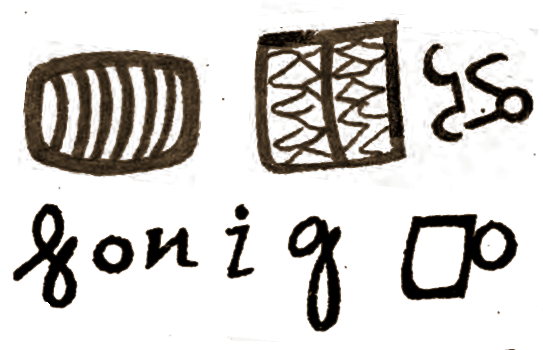 Finally, there were many drawings that depicted a figure holding a rod of some kind. Domenech interpreted these as "a medicine man seeking for supernatural power in the entrails of a spirit." His critics argued they were more likely the young boy's teacher, holding a cane. 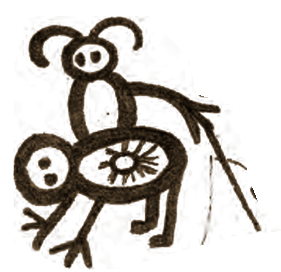 Domenech continued to defend the work, but ultimately unsuccessfully. Modern scholars do not believe it to be a Native American manuscript. The true author of the symbols has never been determined.
Links and References
19th-Century Hoaxes (1850-1900) Anthropology
Tweet