In 1956, runners bore the Olympic flame across Australia, on a path from Cairns to Melbourne, where the summer games were to be held. But the torch relay was plagued by a series of setbacks. Torrential rains soaked it. Burning heat almost overwhelmed the runners. The flame went out a few times, and the torch fell to the ground and broke near the town of Lismore. Then, in Sydney, it encountered a situation unique in Olympic history. 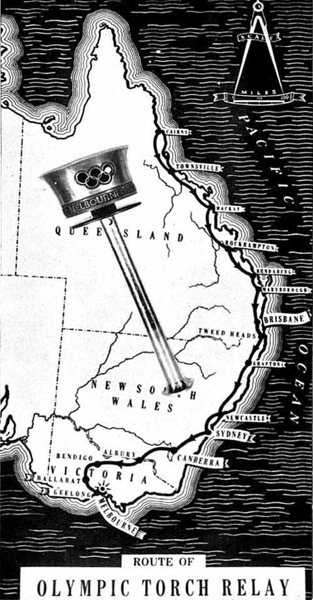 Route of the 1956 Olympic torch relay, from Cairns to Melbourne.
Cross-country champion Harry Dillon was scheduled to bear the flame into Sydney, where he would present it to the mayor, Pat Hills. After making a short speech, Hills would pass the flame along to another runner, Bert Button.

Thirty-thousand people lined the streets of Sydney waiting for Dillon to arrive. Reporters stood ready with their cameras to record the historic occasion. Finally, at 9:30 am, the runner appeared, bearing the flame aloft, and everyone began cheering. As the crowd pressed forward a police escort surrounded the runner in order to keep order.

With this escort around him, the runner — a young man in grey sports trousers, white shirt and tie, and perspiring heavily — made his way through the streets to the Sydney Town Hall. He bounded up the steps and handed the torch to the waiting mayor who graciously accepted it and turned to begin his prepared speech.

At that point, the mayor realized something was wrong. The handle of the torch was sticky because the silver paint on it hadn't dried. Then someone whispered in the mayor's ear, "That's not the torch."

Suddenly the mayor realized what he was holding. Held proudly in his hand was not the majestic Olympic flame. Instead he was gripping a wooden chair leg topped by a plum pudding can inside of which a pair of kerosene-soaked underwear was burning with a greasy flame. The mayor looked around for the runner, but the man had already disappeared, melting away into the surrounding crowd.

The mayor regained his composure and addressed the crowd: "That was a trial run. Our friends from the university think things like this are funny. It was a hoax by somebody. I hope you are enjoying the joke."


The Pranksters
The identity of the rogue runner was only publicly revealed years later. It was Barry Larkin, a veterinary science student at Sydney University's St. Johns College. He had dreamed up the prank in collusion with eight other students.

Their intention was to poke fun at the torch relay which they felt was being treated with too much reverence considering the tradition's dubious past. It traced its origins back to the 1936 Berlin games organized by the Nazis. 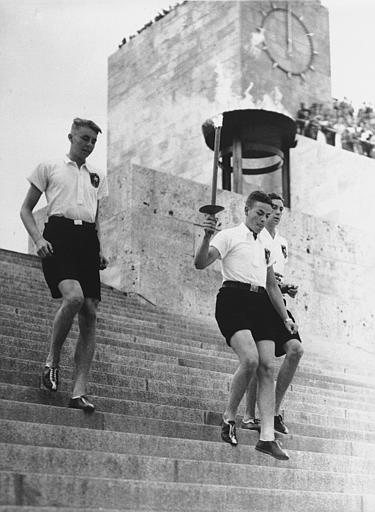 The Olympic flame in the Berlin stadium, August 1936
Originally, Larkin wasn't supposed to have been the bearer of the flaming underwear. One of the other students had dressed up in white shorts and a white top, like a runner, but he panicked at the last minute and dropped the torch. Larkin, wearing a tie, picked it up and started running.

Because the official flame-bearer had been delayed outside of Sydney, the crowd assumed Larkin was the real thing, especially when a police escort joined him. Larkin later recalled in an interview what the experience felt like:


"The noise was quite staggering. There were flashes of photography. I felt very strange because I knew I was carrying a fake torch. The only thing I could think about was what do I do when I got there. I was helped by Pat Hills. I just turned around and walked back down the steps, through the crowd and onto a tram and back to college."
Reaction
The mayor took the prank in good humor, but the crowd, once it realized what had happened, began to grow unruly. When the real runner arrived a few minutes later, the crowd was milling around excitedly in the street, as if stirred up by the mischief. In the crush of people, women began screaming for the safety of their children. Hills called out for calm. A police convoy had to clear a path for the flame-bearer to get through.

The real runner, 50-year-old Dillon, showed up at 9:40. He presented the torch to Hills who said, "On your behalf, I accept this Olympic torch which has come all the way from Greece, and which has been carried from Cairns."

Then the torch was passed to the next runner, Bert Button. An army truck had to clear a path to allow him to continue with the relay.

Back at his college, Larkin was given a hero's reception. When he walked into the hall for breakfast the next morning, his fellow students gave him a standing ovation. Even the rector of the college walked up to him and said, "Well done, son."

The fake torch was taken to a Town Hall reception, and ended up in the possession of John Lawler, a man who had been travelling with the relay in a car. He stored it for years beneath his bed, until eventually it got thrown out while tidying. 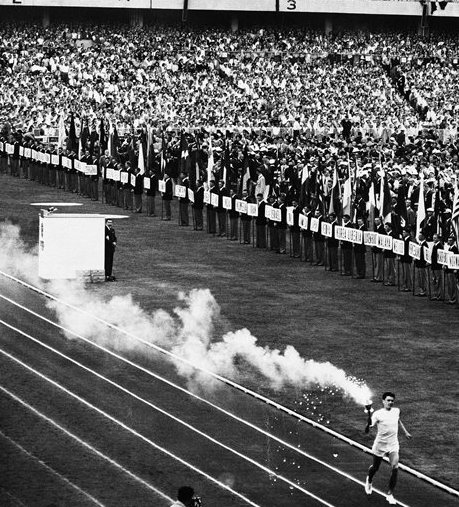 Runner Ron Clarke carries the real Olympic torch into Melbourne Stadium, Nov. 22, 1956
2000 Games
In 2000, the Olympic Games were again held in Australia, and once again the Olympic Torch was carried by runners around the country. Numerous newspapers took the opportunity to retell the story of Larkin's 1956 prank, prompting authorities to make preparations in case someone would try to repeat it.

Security guards lined the route, keeping people away from the runner. Many bystanders complained they couldn't even see the torch. A few pranksters did their best to disrupt the relay. Two teenagers tried to grab the torch, and one young man tried to put it out with a fire extinguisher. But no one succeeded in replicating Larkin's prank.
Links and References

When we were faced with the Olympic madness in Vancouver 2010, the Australian students and Larkin carrying the flaming underpants surfaced again.

The torch farce came to Duncan, British Columbia, where crowds in identical mittens and machine knitted hats gathered to be seen gathering to cheer etc. Hoping to inject a drop of sanity, I made small notice that the torch relay dated back to Hitler rather than ancient Greeks, and taped it to the pram I use to carry heavy objects, occasional cats, and groceries.

Perhaps predictably, I seemed to keep running into men who seemed to have problems with daylight. The torch running stuff, by the way, was followed by an extraordinary number of police and security vehicles, including a huge navy blue bus, said to have been carrying the bomb squad.

I left before the torch arrived.

Went grocery shopping at a Canada Safeways, where a manager kept trying to kick me out for 'propaganda", but I just kept saying I wanted some fish and some toilet paper. I walked around with my old pram, he kept appearing and saying he thought I said I was leaving. Step one for dealing with terrorists, probably from the daylight problem tax-funded squad.

I wasn't leaving at all. It was such fun. I took my time and considered hissing "Kiss me". But that might have set off guns or something…

On my way home, people commented on my little sign on the pram. Hitler? they said. Great conversations, gratitude. I left the sign on the pram and many times later in the Safeways no manager after that said anything about it.