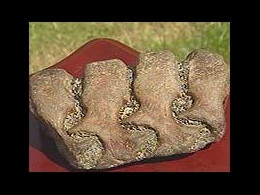 On July 2, 2003, Gerald McSorley, a Scottish pensioner, found a fossilized section of a plesiosaur vertebrae when he accidentally tripped and fell into the loch. Nessie enthusiasts speculated the fossil might have come from an ancestor of the monster. But subsequent examination revealed the vertebrae were embedded in limestone not found near Loch Ness, and the fossil showed signs of having recently been in a marine environment. In other words, it was clear the fossil had been planted at the loch. [BBC News]
Loch Ness Monster Hoaxes
Tweet