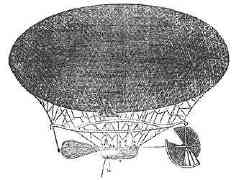 The New York Sun included a broadside, or extra page, in the midday issue of its April 13, 1844 edition, announcing that the famous European balloonist Monck Mason had succeeded in flying across the Atlantic Ocean in 75 hours. This was major news, being the first time the Atlantic had ever been crossed in a balloon.

The balloon, named the Victoria, had supposedly taken off from England on a trip to Paris, but had been blown off course due to a propeller accident and ended up floating across the Atlantic and landing on Sullivan's Island, near Charleston, South Carolina.

An illustration of the "Steering Balloon Victoria" accompanied Poe's article. Poe had obtained this image by redrawing it from the frontispiece of an anonymous 1843 pamphlet (the author of which was probably Monck Mason) titled Remarks on the Ellipsoidal Balloon, propelled by the Archimedean Screw, described as the New Aerial Machine.

On the day of the article's publication, Poe stood on the steps of the Sun's building in New York City telling crowds that his own story was a hoax. But apparently, amidst the general excitement, not many people paid attention to him. He later wrote an account in the Columbia Spy of the scene following the publication of the balloon news:


On the morning (Saturday) of its announcement, the whole square surrounding the 'Sun' building was literally besieged, blocked up—ingress and egress being alike impossible, from a period soon after sunrise until about two o'clock P.M.... I never witnessed more intense excitement to get possession of a newspaper. As soon as the few first copies made their way into the streets, they were bought up, at almost any price, from the news-boys, who made a profitable speculation beyond doubt. I saw a half-dollar given, in one instance, for a single paper, and a shilling was a frequent price. I tried, in vain, during the whole day, to get possession of a copy.