Shortly before his death in 1702, butterfly collector William Charlton (1642-1702) sent a specimen to esteemed London entomologist James Petiver. Petiver thought it was quite remarkable. He wrote, "It exactly resembles our English Brimstone Butterfly (R. Rhamni), were it not for those black spots and apparent blue moons on the lower wings. This is the only one I have seen."

Carl Linnaeus had a chance to examine the rare butterfly in 1763 and declared it to be a new species that he named Papilio ecclipsis. He included it in the 12th edition (1767) of his Systema Naturae.

But thirty years later, in 1793, the Danish entomologist John Christian Fabricius examined it more closely and realized it was a fake. The black spots had been painted on the wings. The rare butterfly, the only one of its kind ever seen, was nothing more than a common Brimstone (Gonepteryx rhamni). 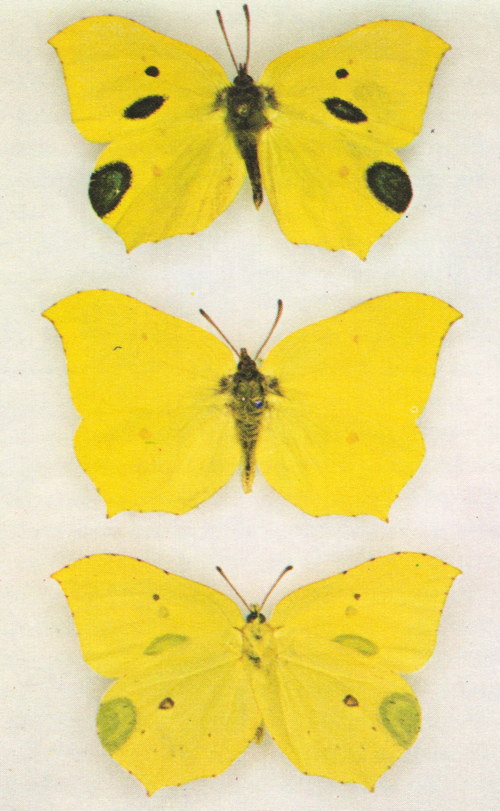 The top and bottom specimens are fakes; the middle one is real.
Dr. E.W. Gray was keeper of National Curiosities at the British Museum where the "Charlton Brimstone" specimen was stored. When he heard of the deception, he is said to have become so enraged that he "indignantly stamped the specimen to pieces."

It is unclear whether this is an example of scientific fraud (i.e. Was Charlton hoping he would be credited with the discovery of a new species?), or if it was intended as a mere practical joke.
Links and References
Science Biology Scientific Fraud 18th-Century Hoaxes
Tweet