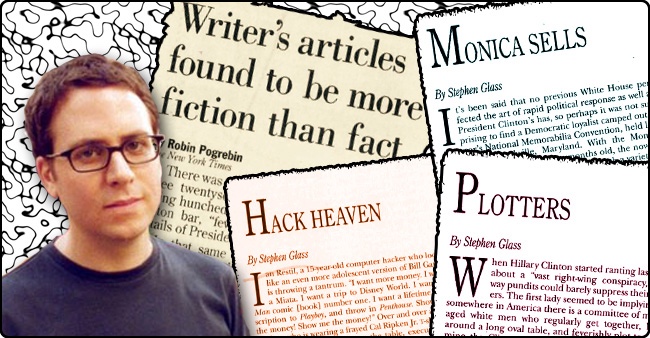 During the mid-1990s, Stephen Glass was a young writer at the New Republic. He had a reputation for always getting the best scoops. For instance, in his most celebrated article, "Hack Heaven," he told the story of a fifteen-year-old hacker who broke into the computer system of a software corporation, Jukt Micronics, and then succeeded in extorting money, a job, a Miata, a trip to Disney World, and a lifetime subscription to Playboy from the company. The article captured the topsy-turvy culture of the 1990s dot-com boom. But it turned out that Jukt Micronics only existed in Glass's own imagination. The New Republic fired him in May 1998 when it found out. His career as a media hoaxer served as the basis for the 2003 film Shattered Glass, in which he was played by Hayden Christensen. External links: wikipedia, washingtonpost.com.
Media Hoaxes Hoaxes by Journalists Rogue Reporters Hoaxes of the 1990s
Tweet