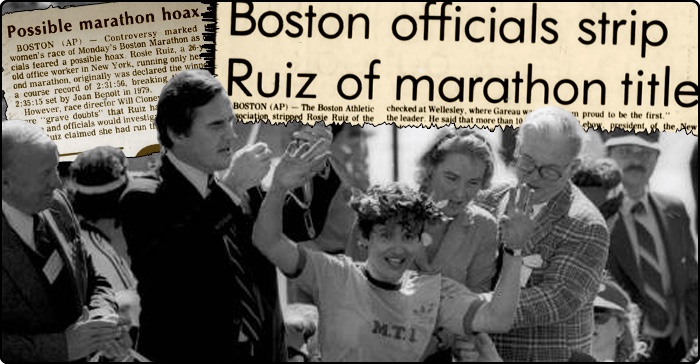 Ruiz supported by police after she crosses the finish line

Rosie displays the plaque stating that she finished the New York marathon
On 21 April 1980, Rosie Ruiz, a 23-year-old New Yorker, was the first woman to cross the finish line in the Boston Marathon. She had achieved the third fastest time ever recorded for a female runner (two hours, thirty-one minutes, and fifty-six seconds), which was made all the more remarkable by the fact that she looked remarkably sweat-free and relaxed as she climbed the winner's podium to accept her wreath. However, race officials almost immediately began to question her victory.

The problem was that no one could remember having seen her during the race. Monitors at the various race checkpoints hadn't seen her, nor had any of the other runners. Numerous photographs taken during the race failed to contain any sign of her. Her absence was overwhelming. Finally, a few members of the crowd came forward to reveal that they had seen her jump into the race during its final half-mile. Apparently she had then simply sprinted to the finish line.

As race officials prepared to announce her disqualification from the race, they discovered evidence that she had also cheated during the earlier New York marathon, where she had earned the time that had qualified her to run in the Boston marathon. She had apparently achieved her time in New York by riding the subway. Officials stripped her of her Boston victory and awarded the title to the real winner, Jackie Gareau.
Links and References
"Miss Ruiz Loses Her Title," New York Times. April 30, 1980. B8.
Sports Hoaxes of the 1980s
Tweet