In 1889 Hilborne T. Cresson, an archaeological assistant at Harvard's Peabody Museum, announced he had discovered a prehistoric seashell pendant that bore an engraving of a woolly mammoth. He said he had found it in a peat and forest layer near the Holly Oak railway station in northern Delaware. 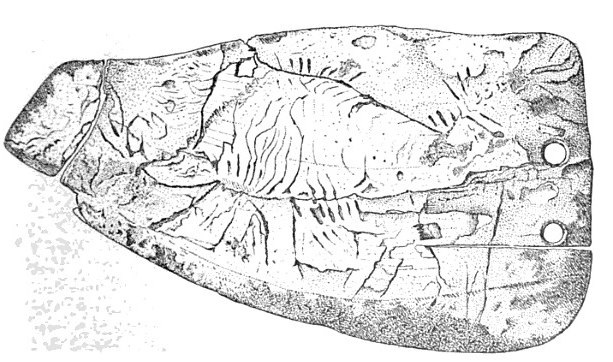 The Holly Oak Pendant
The pendant was an important find, since it suggested that prehistoric man must have been present in the Americas at the time when woolly mammoths still existed, tens of thousands of years ago. However, the pendant was almost immediately suspected of being fake.

One reason for suspicion was the unusual circumstance of its discovery. Cresson claimed he had discovered it in 1864, when he was a teenager, in the company of his music teacher, Mr. Saurault. He offered no explanation for why he had waited twenty-five years to share the discovery, even though its significance should have been obvious to him — especially since his music teacher was himself a student of archaeology.

A second reason for doubt was that the carving on the pendant bore a strong resemblance to an engraving on a mammoth tusk found in 1864 at La Madeleine, France by Eduard Lartet (with whom Cresson's music teacher had studied). The La Madeleine carving had established that humans and mammoths had once lived together in Europe. It seemed as if whoever had carved the Holly Oak pendant had copied the La Madeleine engraving.

The La Madeleine Carving
Doubts deepened even further when Cresson was fired from the Peabody in 1891, after it was found he had been stealing specimens from a dig in Ohio. Cresson subsequently began to display signs of mental derangement. According to his obituary in the New York Times, he began to tell people that he and his son Emlen were wanted criminals, having forged a number of U.S. Treasury certificates. He committed suicide in 1894 by shooting himself in the head. He left a suicide note saying he was "suspected of counterfeiting, and that Secret Service detectives were continually on his trail." Apparently there was no evidence he had forged treasury certificates, or that he was being pursued by detectives. These were paranoid delusions.


Modern Reevaluation and Controversy
The Holly Oak Pendant was all but forgotten until the 1970s, when several researchers, John Kraft and Ronald Thomas, found it in a drawer at the Smithsonian and decided to reexamine it. They concluded that it might actually be a genuine artifact made by a prehistoric artist. 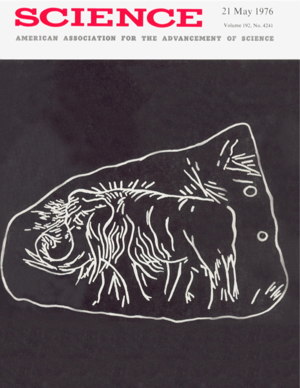 In an article that appeared in the 21 May 1976 issue of Science, Kraft and Thomas noted that they couldn't find any obvious signs that the pendant had been forged. For instance, the carving showed the same amount of weathering as the shell surface, suggesting the carving was as old as the shell itself. They suggested that the pendant could date from the early to middle Holocene epoch (8000 to 4000 bc). An illustration of the pendant was featured on the cover of the same issue of Science.

However, many in the archaeological community remained unconvinced. In 1988, David Meltzer of Southern Methodist University subjected the pendant to radiocarbon analysis. He concluded that the shell dated to around ad 885, far too late for it to have been contemporaneous with woolly mammoths.

Meltzer noted there were other reasons for doubting the authenticity of the pendant. For instance, it was unusual that the engraving would appear sideways when the pendant was worn. Engravings on Amerindian pendants typically are viewed upright. Also, it was implausible that the shell could have survived 10,000 years in the acidic environment of the peat layer where it was supposedly found.

Today the consensus is that the pendant is a fake created in the nineteenth century by Cresson.
Links and References
19th-Century Hoaxes (1850-1900) Archaeology Scientific Fraud
Tweet