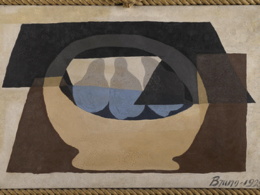 A 1929 exhibition of Bruno Hat's paintings described him as a "newly discovered" artist who had recently moved from Lubeck to Clymping, Sussex, where his talent had been spotted while he was working in a general store. Exhibition guests received a pamphlet, "Approach to Hat," signed by "A.R. de T.", which declared that Hat was "the first signal of the coming world movement towards the creation of Pure Form." In reality, Hat was the creation of London socialite Brian Howard, designed as a spoof on abstract art. The London press played up the exhibition as "an amazing hoax on art experts." Though it's not clear if anyone was actually fooled. [Leicester Galleries]
Satirical Art Hoaxes
Tweet