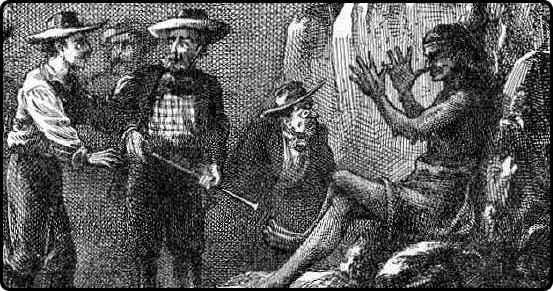 Nevada's Territorial Enterprise reported the discovery of a petrified man in nearby mountains. The body was in a sitting posture, leaning against a rock surface to which it had become attached. The report subsequently was reprinted by many other papers. However, it was pure fiction, written by a young reporter, Samuel Clemens, who would later be better known as Mark Twain. He later admitted surprise at how many people were fooled by his story, since he considered it "a string of roaring absurdities." More… 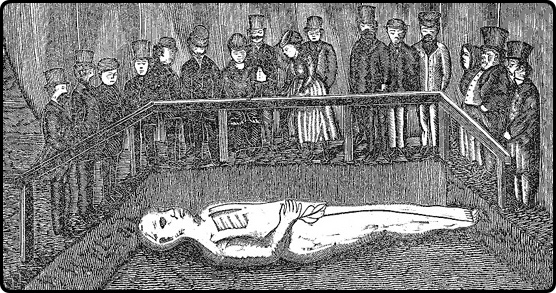 When a farmer in Cardiff, New York found an enormous stone giant buried in the ground as he was digging a well, thousands of people made the journey to see it. Speculation ran rampant about what it might be. Was it a petrified giant from Biblical times or an ancient stone statue? The reality was that it was an elaborate hoax, created by the farmer's cousin, George Hull, in order to poke fun at Biblical literalists. Showman P.T. Barnum later tried to buy the Giant. When he was refused, he created a duplicate that soon was drawing larger crowds than the original. More… 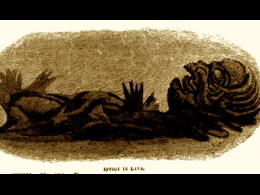 "Effigy in Lava"
(Harper's Magazine, 1863)
In October 1875 two hunters reported finding a small stone man, or "petrified baby" as some newspapers dubbed it, embedded in a gravel bank alongside Pine River in Michigan. The petrified baby was about four feet tall, with an extremely wide, flat forehead. Local papers offered the following description of it:


The right arm is bent. The forearm is lying across the body; the other is bent below the elbow. The eyes are well defined and very broad; forehead flat and sloping. Nose, small, sharp; nostrils open; lips very thin, flat; mouth well defined — curve of the lips perfectly natural; chin square; slight depression or dimple over the breast bone, also just above the arm where the ribs meet, or at least just below where they meet. The form of the breast is perfect. The skin on the surface is smooth, not showing the marks of tools. Some call it a petrified child, and account for the great bredth of the head at the eyes by some pressure that flattened the forehead.
The find attracted some attention as a curiosity, but most speculated that it was a "second edition of the Cardiff Giant," the notorious stone-giant hoax of 1869.

The skeptics were correct. The petrified baby had been manufactured by William Ruddock of Thornton, Michigan. Reportedly, he used as his model a picture of an Icelandic "effigy in lava" that appeared in an 1863 edition of Harper's Magazine.

Ruddock had hoped to make a profit by displaying the petrified baby to the public, but he didn't earn enough to cover his costs. Eventually he sold it to a side show. More…
View More Categories of Hoaxes