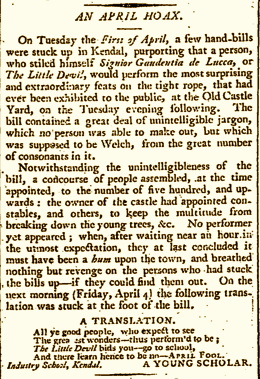 "On Tuesday the First of April, a few hand-bills were struck up in Kendal, purporting that a person, who styled himself Signor Gaudentia de Lucca, or The Little Devil, would perform the most surprising and extraordinary feats on the tight rope, that had ever been exhibited to the public, at the Old Castle Yard, on the Tuesday evening following. The bill contained a great deal of unintelligible jargon, which no person was able to make out, but which was supposed to be Welsh, from the great number of consonants in it.

Notwithstanding the unintelligibleness of the bill, a concourse of people assembled, at the time appointed, to the number of five hundred, and upwards: the owner of the castle had appointed constables, and others, to keep the multitude from breaking down the young trees, &c. No performer yet appeared; when, after waiting near an hour in the utmost expectation, they at last concluded it must have been a hum upon the town, and breathed nothing but revenge on the persons who had stuck the bills up — if they could find them out. On the next morning (Friday, April 4) the following translation was stuck at the foot of the bill.

A TRANSLATION.
All ye good people, who expect to see
The greatest wonders—thus perform'd to be;
The Little Devil bids you—go to school,
And there learn hence to be no—April Fool."