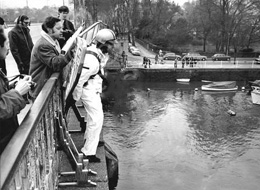 Ken Piper, former paratrooper, tried to fly over the Thames River by jumping off the Twickenham Bridge with wings attached to his arms. He flapped the wings and fell into the water. When he regained dry land, he said, "It was a good one for April Fool's Day."