The Nantucket Sea Serpent Hoax of 1937

There's a long history of sea-serpent sightings off the coast of New England.

A flurry of sightings occurred in August 1817, when fishermen in Gloucester, Massachusetts witnessed a giant sea creature with a horned head ("much like the head of a turtle... and larger than the head on any dog") swimming in the ocean. A local scientific society launched an investigation and concluded that the creature might be a previously unknown species, Scoliophis atlanticus (Atlantic humped snake). However, skeptics denounced the sightings as a hoax. 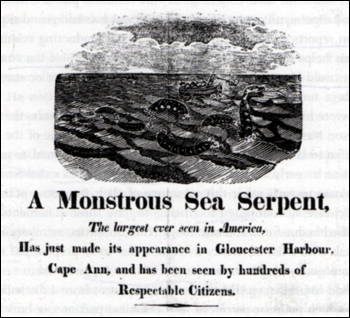 Broadsheet sold by Henry Bowen of Boston - Aug 22, 1817
As the years passed, reports of a sea serpent continued to trickle in. But it was in 1937 that the New England Sea Monster returned to the nation's headlines in spectacular fashion.

The excitement started in early August of that year when fisherman Bill Manville rushed in to the office of the Nantucket Inquirer & Mirror claiming he had seen a "green sea monster — which reared its head several times off his starboard bow before turning seaward." He elaborated that the creature was about one hundred feet long with a head like a barrel and red-rimmed glaring eyes the size of dinner plates.

The report of Manville's sighting got picked up by the news wires and ran in papers throughout the country. 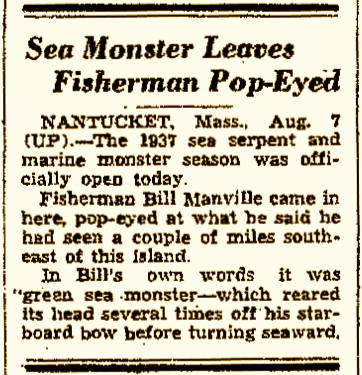 Charleston Daily Mail - Aug 8, 1937
Some in Nantucket suggested that Manville might have been "seeing things," but his sighting was seconded a day later by amateur fisherman (and teetotaler — as the local paper was quick to point out) Gilbert Manter, who saw the creature while he was fishing for bluefish off Smith's point.

Manter said that the creature "looked like a combination snake and whale, with a head much bigger than the neck." He added that it was grayish green with "sort of a horned head" and was "something like 120 feet long and stood up at least a dozen feet out of the water."

Manter walked down to Madaket Beach the following morning with a friend, Ed Crocker, in the hope of seeing the creature again. They didn't see the monster, but they did find "giant web-footed tracks" in the sand. The prints measured 66-inches long and 45-inches wide. 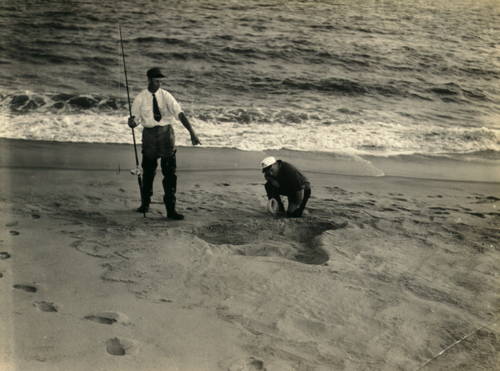 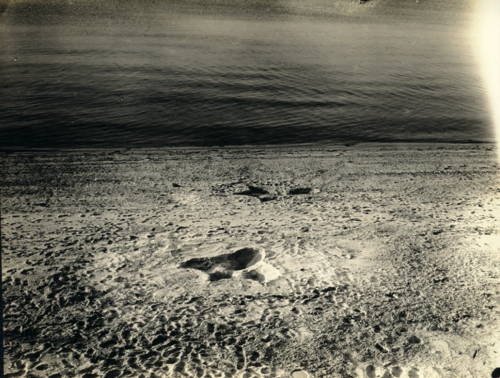 Photos of the tracks appeared in papers, and copies were sent to scientists in New York City for analysis. However, the scientists proved to be skeptical. Dr. W. Reid Blair, director of the New York Zoological Society, said:


"No marine mammal could have left the tracks as they do not move so much on their flippers as they do on their second joint and on their bellies. Evidence of their passage would be seen on the beach only in a slight indentation. As for a land mammal, there is nothing on Nantucket Island that could leave such large tracks."
But Blair's skepticism proved to be unfounded when, a few days later, the sea serpent itself, in its entirety, washed ashore. It was indeed about 120 feet long, with large teeth. However, it had no horn on its head.

It was also a giant, inflatable balloon. 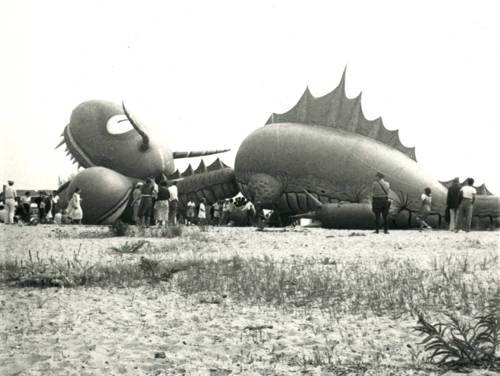 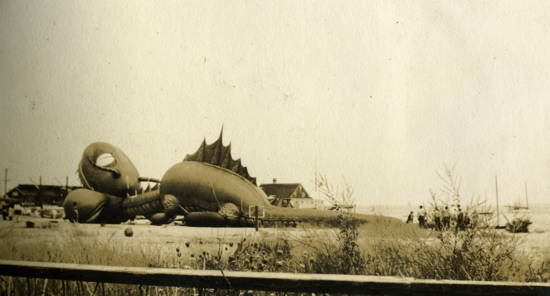 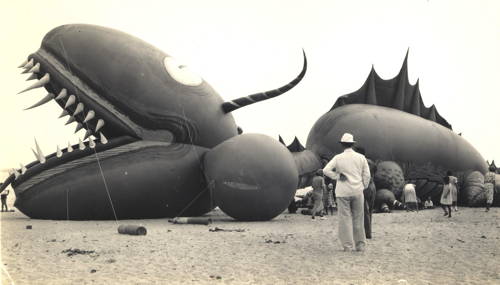 The Nantucket Sea Serpent was revealed to have been an elaborate publicity stunt designed to get Nantucket in the news. The "monster" had been designed by Tony Sarg, the puppeteer in charge of Macy's Thanksgiving Day Parade in New York City.

After stirring up interest with the initial "sightings" (done with the collusion of the local paper), Sarg and his crew put the monster balloon in the water at Coatue beach, hoping to land it at the Jetties. But the balloon veered off course, landing instead at South Beach on Washington Street. 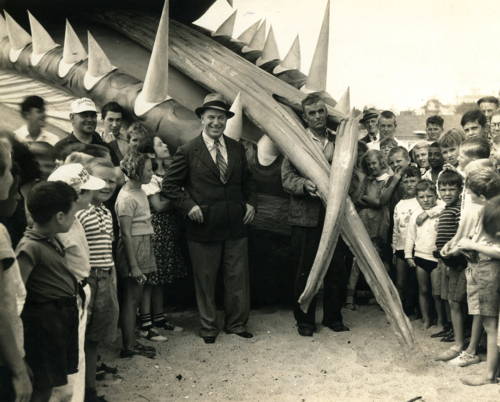 Tony Sarg poses with the monster
Large crowds turned out to see the unusual sight, which remained in place for several weeks. Numerous photographs of the sea serpent on the beach have been preserved by the Nantucket Historical Association.

The Nantucket promoters reportedly felt that the stunt was a resounding success and congratulated each other for the "cash value of the space" obtained in the press for Nantucket.

The monster made another appearance a few months later, floating above the streets of Manhattan, when it participated in the Macy's Thanksgiving Day Parade. 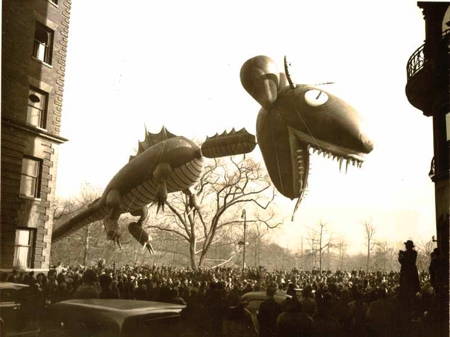 You'd think that Nantucket gets all the publicity it needs just from the limerick.
Posted by Richard Bos  on  Sat Nov 30, 2013  at  07:37 AM
Commenting is not available in this channel entry.