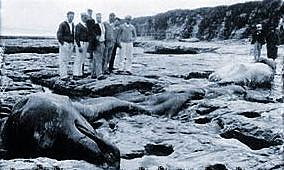 In the summer of 1925, the carcass of a large ocean creature washed up onto Moore's Beach in the California town of Santa Cruz. The creature had a strange duck-like head and what looked like a long neck. Interest in the carcass grew when it was examined on the beach by one E.L. Wallace, who described himself as the president of the Natural History Society of British Columbia, and he declared that it was the remains of a plesiosaur — a species long extinct. He speculated that the animal had died back in the age of the dinosaurs, some 65 million years ago, and its body had then been preserved in the ice of a glacier. But the glacier must have recently melted as it floated south, releasing its long-held occupant, which then washed up on the California beach.

The story of a plesiosaur find was reported widely in contemporary newspapers. But what was less widely reported was that when the carcass was taken to the California Academy of Sciences in San Francisco, the plesiosaur story was quickly debunked. Scientists there immediately identified it as the decomposing carcass of a Baird's Beaked Whale. The long neck was actually just a twisted strand of blubber still attached to the neck.

The real mystery was, who was this 'E.L. Wallace' who had claimed the animal was a plesiosaur? Douglas Long, a research associate at the California Academy of Sciences, recently told the story of the Moore's Beach Monster in an article posted at Deep Sea News, and he notes that E.L. Wallace was the real hoax, since no record of this man's existence can be found outside of his brief appearance on the beach at Santa Cruz. Long writes:


"Either some scientist impersonator dubbed 'E. L. Wallace' ordained himself 'noted naturalist' in an attention-grabbing act of grandstanding and duping local press and public alike, or the name and association was a post-facto fabrication in later writings intended to instill some sense of authority to the plesiosaur claim."
Back in the 1920s, the California Academy of Sciences researchers published their findings about the creature in the Journal of Mammalogy. However, their findings never received the press that the initial claim of a plesiosaur find did. And so the story of a Santa Cruz plesiosaur lingered on in popular culture. To this day, many cryptozoology books and sites still claim that the remains of a plesiosaur washed up on Moore's Beach back in 1925.