Veteran prank artist Joey Skaggs was up to his old tricks recently. At the beginning of June, he sent out a press release announcing that on June 7 the Tiny Top Circus ("the world's only pataphysical circus") would come to New York's Washington Square Park, where it would have "Bigfoot, the 8th Wonder of the World" on display.

June 7 arrived and, as promised, the Tiny Top Circus showed up. It turned out to be Skaggs on a tricycle on which was mounted a tiny bigtop tent. Actually, the tricycle looks very similar to the one he used in his "Portofess" (portable confessional) hoax back in 1992. I'm guessing it's the same tricycle.


Skaggs circled Washington Square Park in a tiny bigtop, pulled by a tricycle. When the tent flaps came up, there was Skaggs, dressed as a giant foot. The prankster laughed and told the crowd, "If you believe in Bigfoot, you're at least as gullible as people who believe in religion or politics." 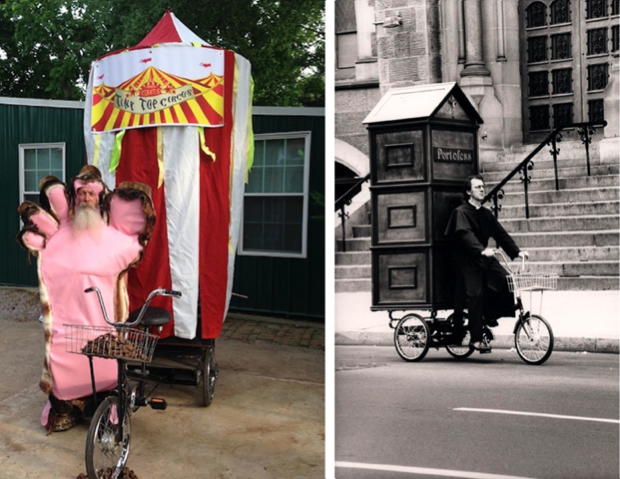 Left: Skaggs as Bigfoot (2014); Right: Skaggs and the Portofess (1992)
Eventually Bigfoot escaped and ran off across Washington Square Park.