In 1933, a picture supposedly showing Adolf Hitler as a baby began circulating throughout England and America. The child in the picture looked positively menacing. Its fat mouth was twisted into a sneer, and it scowled at the camera from dark, squinted eyes. A greasy mop of hair fell over its forehead. 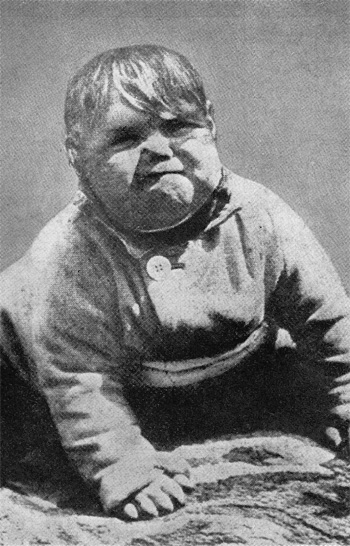 The image was distributed by Acme Newspictures, Inc. and appeared in many newspapers and magazines. For instance, in October 1933 the Chicago Tribune printed it alongside a photo of the adult Hitler addressing 500,000 farmers and storm troopers, above the caption, "Two Pictures of Hitler." The Winnipeg Free Press ran the picture with the caption: "This is a picture of a man who controls the destiny of a mighty nation, as he appeared when he was not quite one year old. Do you think this photo is prophetic of the figure he has become? The picture is one of Adolf Hitler, who was born in 1889." 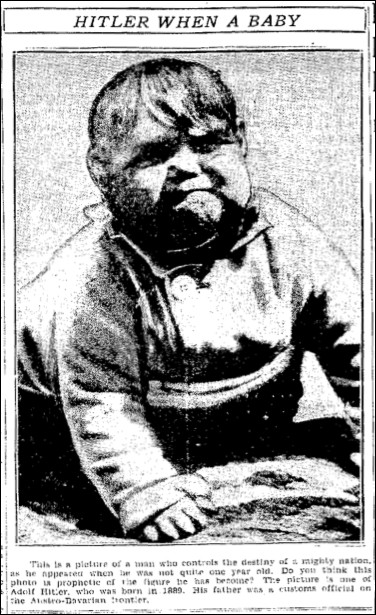 Winnipeg Free Press, October 25, 1933
However, the baby picture didn't actually show the infant führer. The German consulate in Chicago wrote a letter to the Chicago Tribune correcting the error:


In the Rotogravure section of the... Tribune of October 22, 1933 there appeared under the title 'Two pictures of Hitler' two photographs, one purporting to be a 'baby picture' of the present Chancellor of the German Reich... and the other showing the Chancellor addressing 500,000 farmers and storm troopers... The alleged 'baby picture'... was sent to the Foreign Office in Berlin and the Consulate General was recently advised that the photograph stated to be a 'baby picture' of the Reichs-Chancellor is a falsification. The Foreign Office in Berlin transmitted at the same time a copy of an authentic photograph of Reichs-Chancellor Adolf Hitler before he attained the age of one year with the request to bring the matter to your attention. 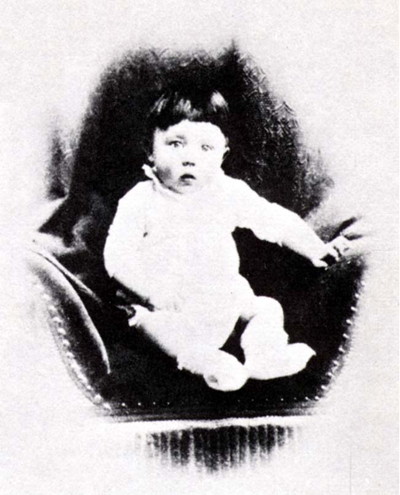 The real baby Adolf
Subsequent investigation by Acme Newspictures found that the Baby Adolf picture had come from the syndicate's London bureau, which, in turn, received it from Austria, Hitler's native country. Beyond that, the trail went cold. The identity of the hoaxer was unknown.


The Baby Identified
If the baby in the picture wasn't Adolf Hitler, then who was it? The answer to this question wasn't known until 1938.

Mrs. Harriet Downs of Ohio happened to see the picture in a magazine and immediately recognized it as her son (by a former marriage), John May Warren. However, in the original image her son looked cute, bright, and wholesome. Someone had darkened the shadows around the child's face to give him a more sinister look. 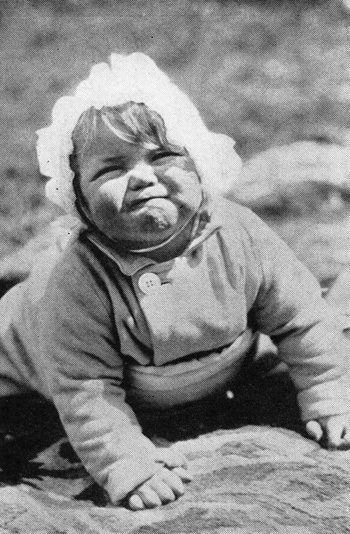 Mrs. Downs contacted Acme Newspictures, who, in May 1938, issued a correction:


"The picture purporting to be that of Baby Hitler actually was a photograph of 2-year-old John May Warren, then of Westport, Conn., now residing in Lakewood, Ohio... Recently, Mrs. Harriet M.W. Downs noticed the false picture reprinted in a magazine and recognized it as a photo of her son by a former marriage, John May Warren, now grown into a strapping, freckled schoolboy of eight years, who looks nothing like Hitler. The original snapshot had been retouched so that a baby cap was painted out and the features distorted so that what had been a babyish squint in the true picture appeared as a particularly unpleasant grimace."
It still remained a mystery how John Warren's picture had ended up in Austria in the hands of a photo forger. That mystery has never been solved.

Tragically, John Warren died a few months after Acme issued its correction, when he fell from his bicycle and pierced his heart on a milk bottle. 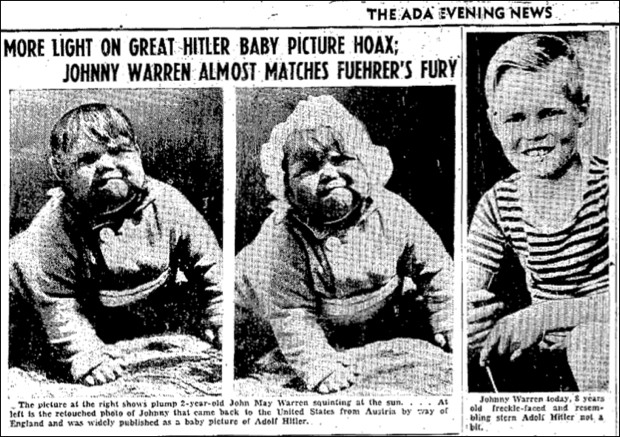