A scientist discovers that mankind's technology is causing the world to warm. Although the effect is currently subtle, it will rapidly grow more pronounced. Research indicates that Europe will soon become a tropical zone. A few years later the entire world will be a sweltering inferno, unfit for life. The scientist tries to alert the world's governments, but the politicians ignore him. Desperate, he resorts to industrial sabotage, but his efforts prove futile. Finally, he succumbs to hopelessness, and he dies of fright, agonizing over the fate of the human race.

This tale of global warming and a scientist's unsuccessful effort to stop it might sound like something out of today's headlines, but it isn't. The story appeared in newspapers over one hundred years ago, in 1874. It was presented to readers as a factual account of events, but in reality it was almost entirely fiction. It was a nineteenth-century global-warming hoax.

The Transatlantic Telegraph Cable and the End of the World
The tale first surfaced in early February 1874, when the Kansas City Times printed the text of a letter it claimed to have received from one J.B. Legendre, who said that the letter had been sent to him, in turn, by an unnamed "American man of science" living in Florence, Italy. The correspondent detailed a discovery "of great and even agonizing importance to the human race" that he had learned of from other scientists in Italy.

The discovery was attributed to the Italian astronomer Giovanni Donati, who for many years, it was said, had been making daily measurements of the distance from the earth to the sun by means of an invention of his own design. In the course of making these measurements, Donati noticed that when the first transatlantic telegraph cable was laid, in 1858, the earth began to move closer to the sun. Initially the shift in orbit was quite gradual, but it quickly grew larger. And when another cable was subsequently laid connecting France to Massachusetts, the movement of the earth toward the sun accelerated rapidly.

Donati realized, to his terror, that the cables were acting like enormous electromagnets, pulling the earth into the sun. He calculated that if the earth's current trajectory continued unchecked, Europe would become tropical in 12 years, and the entire earth would be uninhabitable soon after. Finally the planet would plunge into the sun.

Image from nasa.gov
Donati warned the governments of the world, but the politicians were preoccupied with plans for war and paid him no heed. So he convinced several of his colleagues to join him in chartering a boat and breaking one of the cables. But the break was soon repaired, and the earth's descent into the sun continued.

Seeing there was no hope, and that the world was doomed, Donati's health gave way. He died of despair in December 1873. 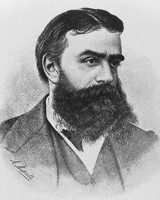 Giovanni Donati
This fanciful tale of imminent global apocalypse contained a few fragments of truth. There really was an Italian astronomer named Giovanni Donati. He was a pioneer of the spectroscopic study of stars, comets, and the sun. He discovered a number of comets, one of which is named after him.

It was also true that Donati had died in December 1873, but his death was a result of cholera, not despair.

Finally, the transatlantic telegraph cables were quite real and well-known.

The rest of the story, however, was pure fiction.


Reception
The gloomy prediction and warning about the unforeseen danger of mankind's technology immediately attracted attention. Within weeks, the entire text of the letter had been reprinted by papers throughout the United States, appearing under the headline, "A Scientific Sensation."

However, although many papers reprinted the letter, there's no evidence any of them took it seriously. In fact, given the magnitude of the threat detailed, the attitude of papers toward it was strangely casual. Instead of giving it top-of-the-page billing, they typically placed it further down the page, sandwiching it between items about congressional proceedings and the price of silver. When the New York Daily Tribune reported about the story on the 24th of February, it dismissed the idea as "absurd."

By April, interest in the end-of-the-world prediction had begun to fade. Some papers continued to report the rumor that the great astronomer Donati had died "from excitement consequent upon discovering that the earth is approaching the sun so rapidly that in ten years it will be drawn into the sun and shriveled up." But they accompanied this disclosure with the joking remark that, "This will be discouraging news to the insurance companies." 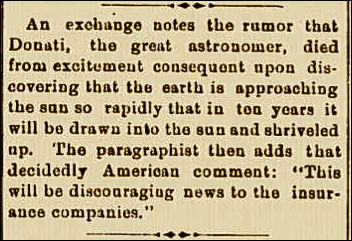 Columbia Daily Phoenix, April 19, 1874
By May, the report of mankind's immiment fiery demise had been entirely forgotten.

It's not surprising the letter didn't generate more excitement because hoaxes appeared in late-nineteenth-century American newspapers all the time. Newspaper editors and readers were used to them. And this particular hoax evidently didn't even seem very convincing to anyone, probably because it was so far-fetched.

Science-themed hoaxes were a particular favorite of bored reporters. They regularly tried to hoodwink readers with stories about man-eating plants, lunar penal colonies, and mastodons found alive in Siberia. The New York Tribune, in the same paragraph where it declared the global-warming tale to be absurd, complained about how many science hoaxes were appearing in papers:


So many elaborate hoaxes, originating in this country, have imposed upon men of science at home and abroad, that America has gained in some quarters an unenviable reputation. It would be tedious to enumerate these impositions — from Locke's Moon Hoax down to the Cardiff Giant — for scarcely a week passes that a new one is not started, getting more or less of a newspaper run according to its ingenuity... Prof. Agassiz, speaking about this class of hoaxes, while expressing indignation at their authors, made the remark that, 'after all, if a scientific student is humbugged by them, he must be himself to blame.'
All these science hoaxes were the predecessors of today's science fiction. In the early twentieth century, pulp magazines came into existence that provided a home for science fiction stories and helped to establish the genre on firm footing. But during the 1870s and 80s, there was no obvious place for writers to publish such stories except for in newspapers, and they often published them there as fact — that is, as hoaxes. Edgar Allan Poe, who's widely credited with being an early pioneer of science fiction, published many of his stories as hoaxes.

The 1874 global-warming tale was a minor media hoax. Nevertheless, the tale appears to be one of the earliest (if not the earliest) fictional depiction of global warming triggered by mankind's technology — although it identified undersea cables rather than carbon emissions as the cause of the warming. It was in 1896 that a scientist, Svante Arrhenius, first suggested that human-produced carbon emissions might cause the surface temperature of the earth to rise.


The Text of the 1874 Global Warming Hoax

To the Editor of the Kansas City Times:
A friend of mine residing in Florence, an American man of science traveling for the sake of his health, lately wrote to me as follows:

"I have attended the meetings of one of the numerous scientific coteries with which Italy is blessed. In one of them a subject was broached which if generally known would startle the whole civilized world. One of the members, a man whose name is known in both hemispheres, asserted that the celebrated Donati (who lately died, much regretted by scientific men) had been a victim, not to disease or to time, although he was in a "green old age," but to nervous excitement or fright, caused by a discovery which he had made of great and even agonizing importance to the human race.

Donati had for many years been employing his unbounded energy in exploring some of the "hidden things in astronomy." of these investigations he kept a strict record of solar phenomena especially. He constructed an instrument by which he could calculate the earth's exact place in the great ellipse that it travels around the sun, and also, in his own estimation, its distance from the sun, although in this latter point he was not universally credited by his scientific colleagues. He never failed to make minute daily records of the result of his observation, and to this custom he owed his fresh discovery. On the very day that the cable was laid, his instruments showed him that the earth, like some vast ship towed by invisible hands, was drawing nearer to the sun. Every month after that epoch its distance was perceptibly lessened, as shown by his instruments, much more delicate than telescopes or the human eye.

When the French cable was laid there was an acceleration very marked in this attraction to the sun. Donati thought that this movement was increasing in a geometrical ratio.

He explained this alarming fact by certain reasonings based on the connection between gravitation and magnetism, which I suspect my friend was hardly able to follow.

His conclusion was this: That in twelve years the climate of Europe would become tropical, if not unfit for human existence, and that in a few more years this globe, which, with all its faults we love so well, would be precipitated into the sun.

It seems that Donati had in vain tried to bring this matter before the Italian government — hoping through it to reach the nations most interested in oceanic telegraphs — but the war politics had prevented any notice being taken of his representations.

He thought that if America and England could be induced to examine his data and proofs they, seeing the tremendous consequences of man's tampering too far with the machinery of nature, would speedily cause these cable to be things of the past.

His failure induced him to think of private enterprise, and several wealthy Italians, amateurs of science, combined together, chartered a brig and expensive machinery, and by their patriotic (although patriotism is too petty a name) efforts produced the first break in Field's cable, laid by the Great Eastern. Donati's instruments quickly showed that the earth was nearing its normal ellipse. But the break was quickly repaired, and once more the earth commenced its infinite spiral journal to the flames.

Donati's health gave way. Age and disappointment hastened his dissolution. A few days before his death he carefully sealed up all his manuscripts, with directions that they should not be opened for five years."

So much for my correspondent, Mr. Editor. Make of him such use as seems best to you. I am yours respectfully,
J.B. Legendre

[Note: The Museum of Hoaxes periodically receives emails suggesting that we should add modern-day global warming to the site because it's apparently the "biggest hoax in human history." We don't believe this to be the case, but we're hopeful that this confirmed (nineteenth-century) global-warming hoax might satisfy these correspondents.]

Looking at the global warming hoax of 1874, and reflecting on your note about modern day global warming, I am wondering why you don't at least have the hoax of the 1970s about global cooling. We know it had to have been a hoax because it has been proven unequivocally false by today's global warming alarmist, who don't even acknowledge that they were the same ones claiming global cooling 40 something years ago, but now claim there was no global cooling back then; you know the hockey stick theory. I just found this sight and will be interested if you will include that hoax, or ignore this email.