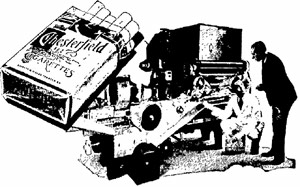 The Liggett and Meyers Tobacco Company, maker of Chesterfields, repeatedly denied the rumor, but to no avail. The company even arranged for the mayor of Richmond to issue a statement assuring the public that the Chesterfield factory had been investigated and no leper found working there. Still sales continued to decline.

The company suspected that the rumor was started by one of its competitors. However, it could never prove this. It offered a $25,000 reward to anyone who could help it locate the source of the rumor, but the source was not found.

A parallel rumor suggested that the rumor had been started by religious groups opposed to smoking.

Chesterfield ran advertisements that emphasized the clean, modern machines used to manufacture their cigarettes. Nevertheless, it took a full decade for the company to finally shake the rumor and for sales to fully recover.


History of the Rumor
The Chesterfield rumor was not the first time public fears had linked cigarettes with leprosy. The fear of lepers working in cigarette factories was an old one, dating well back into the nineteenth century. For instance, on June 12, 1882 the Pennsylvania Chester Times presented its readers with this warning:


A physician who has studied the disease says that it is dangerous to assume that it can only be contracted by actual contact. The very atmosphere in which a leper moves is contaminated. It can be caught by using a chair or room which has been occupied by one afflicted with the disease, or by using a drinking vessel or anything that has been touched by a leper. The street cars are a prolific source of the contagion. Lepers are employed in the cheap cigar and cigarette shops, and scores of instances of the disease are known to have arisen from smoking the articles made by their plague-stricken fingers.
During the 1940s, the leper rumor also became associated with Spud, the first menthol brand of cigarettes. Some sources claim that because of the rumor Spud went out of business within six months, but this is not true. Spud was actually acquired by Philip Morris.

During the Vietnam War a version of the rumor popped up among GIs. It was said that the marijuana cigarettes readily accessible in Saigon, and smoked by many soldiers, were rolled by the inmates of a leper colony. Supposedly the lepers performed the work in an assembly line process according to their handicaps. The sickest ones had the job of licking the wrappers to seal the joint. Some skeptical soldiers voiced suspicions that pentagon generals had started the rumor as part of an anti-drug campaign.
Links and References
Rumors and Legends Hoaxes of the 1930s Gross-Out Hoaxes
Tweet

The last paragraph about US Soliders of the Vietnam War being told about lepers working at making joints reminded me of another legend that was apparently propagated amongst Allied soldiers in Korea and Vietnam. I don't think I recall seeing it on here but I do remember reading a source online where an old Psych-ops officer remembered hearing various rumours on a theme that's a little similar:

Basically, it was alleged in both wars that servicemen who had contracted Syphillis or other sexually transitted illnesses, and who were severely ill with them so that they couldn't be returned to their duties, were being secretly evactuated to an offshore island base somewhere, where they would be held until they died, while their next of kin would simply be informed that they were missing or killed in action. Naturally no evidence ever surfaced that such a thing was actually happening, but many Allied soldiers were adamant that the rumour was true, and always had a 'friend of a friend' who was a medic or a chopper crewman or something, who had been involved in moving patients to the island. At some point when I find the place I heard the story of the rumour again I'll post a link on here. Naturally, there was never any evidence of bases or hospitals like that actually existing, or men with such illnesses actually treated that way.

The author I had read the story from reported that he was sure an officer in some unit or another, possibly another Psychological Warfare outfit, had been propagating the rumour in an attempt to stop Allied soliders frequenting prostitutes in the towns and cities they encountered, or pursuing relationships with local women, so they were spreading horrific tales of men catching sexually transmitted illnesses from local women and dying slowly, exiled to secret bases. The fact that veterans of Korea and Vietnam turned up who had heard the rumour made that author feel that the rumour must have started out in Korea, and been resurrected later by officers or servicemen who had been in that war and later thought it might be useful in Vietnam, to frighten servicemen into keeping it in their fatigues in case they ended up secretly wasting away on an island somewhere.