Lou Stone
Louis Timothy Stone (1875-1933), more popularly known as Lou Stone, or the Winsted Liar, was a journalist famous for the hundreds of fanciful articles he wrote about the strange flora and fauna surrounding his hometown of Winsted, Connecticut. It was said he had a "faculty for seeing the unusual in stories."

He lived his entire life in Winsted, refusing offers from other papers to relocate. He started out at the age of thirteen as a printer's devil at the Winsted Evening Citizen and a few years later was made a reporter there.

In 1895, at the age of twenty, he created his first and most famous tale when he sent out a wire report claiming a "wild man" had been spotted in the woods outside of Winsted. The big city papers sent reporters to investigate, but all they ever found was a stray jackass.

After this, Stone continued to send out weekly reports about bizarre animals and plants around Winsted. These reports were run by many newspapers, making him one of the most widely read writers in America. In fact, it was often said that he "placed Winsted on the map." A billboard at the edge of the town stated exactly this:


Winsted, founded in 1779, has been put on the map by the ingenious and queer stories that emanate from this town and which are printed all over the country, thanks to L.T. Stone.
Stone eventually became general manager of the Winsted Citizen. He died on March 13, 1933 after a long illness. After his death, the residents of Winsted named a bridge after him. The bridge spanned Sucker Creek.


Stone's Tall Tales
Some of the tall tales that made Lou Stone famous include: 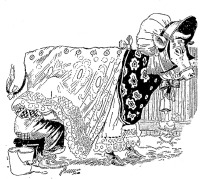 It was not Sucker Creek, it was Sucker Brook! I always wondered why the Stone Bridge had no stones in it. Now I know. It was removed when the new dam went. Can't tell the facts from the fiction 'round there.
Posted by Frank Sherwood  on  Mon Apr 02, 2012  at  02:37 PM