An article that appeared in the Washington Post on September 28, 1980 told a heartwrenching tale. It detailed the life of 'Jimmy,' a young boy who had become a victim of the thriving heroin trade that was devestating the low-income neighborhoods of Washington D.C. Caught in a cycle of addiction, violence, and despair, Jimmy had become a heroin addict after being introduced to the drug by his mother's live-in boyfriend. As Janet Cooke, the author of the article, described him, "Jimmy is 8 years old and a third-generation heroin addict, a precocious little boy with sandy hair, velvety brown eyes and needle marks freckling the baby-smooth skin of his thin brown arms." She noted that Jimmy aspired to be a heroin dealer when he grew up. 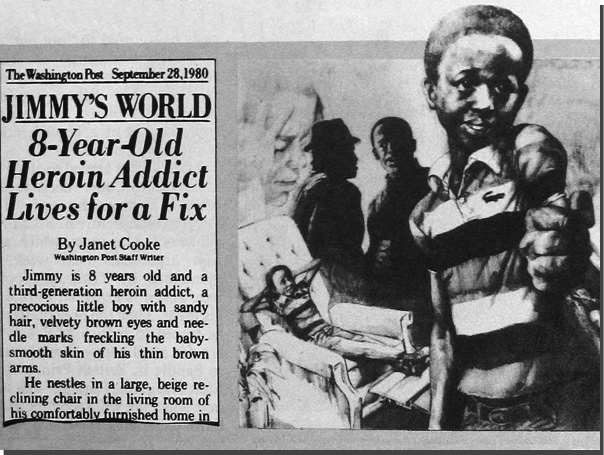 The story immediately generated controversy. Many demanded that Cooke reveal where the boy lived so that he could be helped. However, Cooke refused to provide his location, claiming she needed to protect her sources and that her life would be in danger from drug dealers if she failed to do so. Meanwhile, the city government launched an intensive search to find him.

As the popular outrage about Jimmy grew, rumors began to swirl around the city suggesting that he didn't exist, that Janet Cooke had simply made him up. The Post stood by her and denied these rumors, but the issue came to a boil on April 13, 1981 when Cooke was awarded the prestigious Pulitzer Prize on account of her story.

The editors of the Post, who had learned that Cooke had lied about various academic credentials on her resume, confronted Cooke and demanded she provide proof of Jimmy's existence. Cooke, unable to do so, finally admitted that she had never met Jimmy and that much of her story was fictitious. Cooke offered her resignation, and the Post, humiliated by the incident, returned the Pulitzer Prize.

A year later Cooke appeared on the Phil Donahue show to offer her take on what happened. She blamed her decision to invent Jimmy on the high-pressure environment of the Washington Post, which was still riding high from the journalistic coup it had scored in the early seventies with the Watergate story. She claimed that numerous street sources had hinted to her about the existence of a boy such as Jimmy, but unable to find him, she eventually created a story about him in order to satisfy her editors at the Post who were pressuring her to produce something.

Cooke was disgraced as a journalist and dropped out of the public eye for many years. She briefly re-emerged in 1996 to tell her story to the magazine GQ. The movie rights from that interview were reported to have subsequently sold for $1.5 million.
Links and References
Newspapers and Magazines Hoaxes of the 1980s Hoaxes by Journalists Rogue Reporters
Tweet