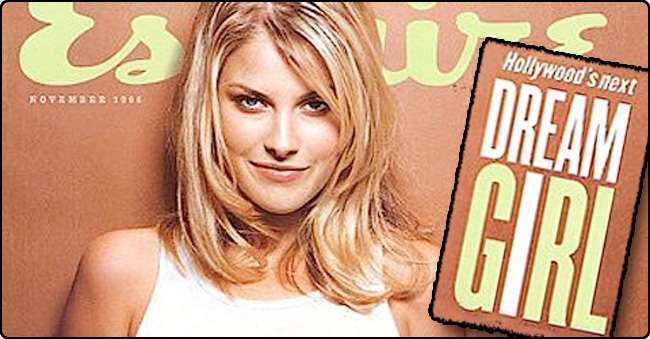 The feature article inside described the buzz building around her. David Schwimmer, star of Friends, was said to be her on-again, off-again boyfriend, although he was getting some competition from Quentin Tarantino who had apparently dumped Mira Sorvino to go out with her. It was even rumored that Woody Allen had completely overhauled his next movie so that she could star in it. "The real thing," the article gushed. "She has it."

The source of Allegra's appeal was not entirely clear. "Her nature is spongy and luminescent," the self-help guru Deepak Chopra was quoted as saying. Excerpts from her diary didn't clarify matters. "I am having thoughts," one entry read. "Really getting into thinking." She seemed to be a mystery. Or, as Allegra herself put it, "It's like Stonehenge, you know? The biggest mystery, totally unsolved."

Hollywood was intrigued. After Esquire ran the article, the magazine received calls from talent scouts, eager to get in touch with the new star. But not all readers were taken with Allegra. The St. Louis Post-Dispatch denounced Esquire for celebrating her obvious brainless vapidity.

As it turned out, Allegra really was a mystery, principally because she didn't exist. Esquire had invented her as a spoof of the fawning puffery that many magazines shower on movie stars. The woman shown on the cover and in the photos inside was a (then) little-known actress called Ali Larter. After posing as Allegra Coleman, Larter went on to develop a real career in Hollywood, acting in movies such as House on Haunted Hill, American Outlaws, and Legally Blonde. She is best known for her role on the NBC series Heroes.
Links and References
False Identity Fictitious Persons Newspapers and Magazines Show Business Hoaxes of the 1990s Hoaxes by Journalists
Tweet

I believe that "Allegra Coleman" was the name of Amber Valletta's character in the movie "Hitch".

IMDB only has her listed as "Allegra" though.