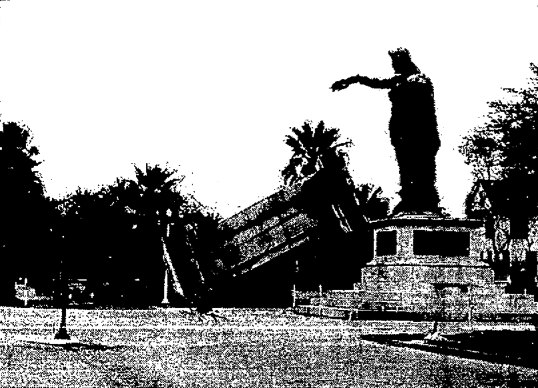 "As shown in the picture above, part of the famed Rosenberg memorial to Texas heroes lies crashed onto the pavement at the intersection of 25th and Broadway, site of the monument. Puzzling part of the strange scene which greets the eyes of Galvestonians this morning is how the usually lofty lady of the laurel wreath managed to drop onto the base of the memorial when the supporting column was 'cut' from under her. Well, to be perfectly frank, the photographer was johnny-on-the-spot. By keeping up with the date and by 'super-imposing' parts of photographs, the above April 1 picture resulted. Just as an April Fool's picture, you know! To repeat — just an April Fool joke." [The Galveston Daily News - Apr 1, 1947]
April Fool's Day Hoaxes Involving National Landmarks April Fool's Day, 1947 April Fool's Day Photo Hoaxes
Tweet