The Honolulu Star-Bulletin reported that Hawaii would no longer face a shortage of fish, thanks to Norwegian scientist Thorkel Gellison who had trained squid to catch fish and bring them back to shore. A single one of Gellison's squids could bring in a dozen fish every 30 minutes, and his school of 100 trained squid could easily supply several tons of fish daily.

Gellison planned to sell the fish for a budget price, hoping simply to be able to cover the cost of maintaining his squid school, plus a small percentage for handling. 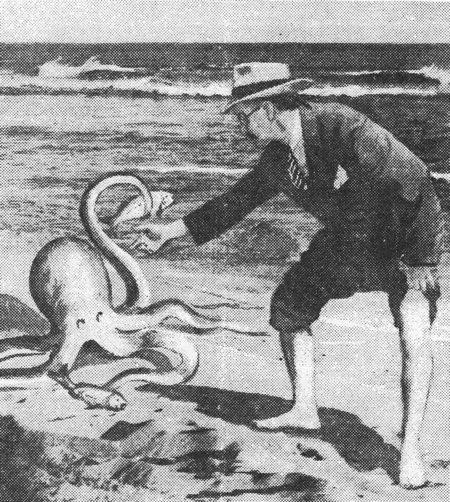 Col. Thorkel Gellison, noted Norwegian scientist and explorer, and president of the internationally famous Loof Lirpa society, is in Honolulu with plans that will assure civilians of a fresh fish supply for the duration.

Well known here for his famous inventions, Col. Gellison has brought with him his entire school of trained squid, which are small octupus (hee to Hawaiians) and which have been taught to go to sea and catch fish.

"They have been most useful in the Norwegian fjords," says Col. Gellison, "and have been able to catch several tons of fish daily. Lately, however, they have become homesick for warm, tropic waters, so I have brought them here to relieve Honolulu's fresh fish famine."

Col. Gellison plans to put the squid to work immediately. Here is the way he works:

At dawn each morning he assembles the squid on the seashore. When he gives the word, they enter the water and roam out to sea in search of fish. As soon as each gets its quota, it returns to shore, places the catch on the sand, and then goes to sea for more.

"As you know," explains Col. Gellison, "a squid has several tentacles. I have trained my squid never to return to shore unless it has at least half a dozen fish — papio, snapper, weke, moana or other type.

"Some of the larger squid will bring in a dozen fish every 30 minutes, so you can see that a hundred squid can supply a goodly quantity of our finny friends in a day."

Col. Gellison proposes to turn the fish over to the public markets without charge, with the understanding that they be sold to civilians at a price that will represent the maintenance of his squid school, plus a small percentage for handling.

"When I get started," he says, "Honolulans will be able to buy papio for, say, 15 cents a pound, and sea mullet for not more than 20 cents."

Later on Col. Gellison plans to make his squid available to owners of ponds so that mullet can be caught with greater ease and make them worth slightly less than their weight in gold as at present.

Chief of Col. Gellison's squid school is a particularly clever female named Hee Wahine, who has a record of having taken 178,000,000 Norwegian anchovies in a single week.

Col. Gellison trained her to take a purse net to sea off the coast of Vingulmark in Norway and to return with it full every 20 minutes for more than eight months.

Lately, however, she has been depressed due to the untimely death of her mate, also a record holder, while fishing off the Orkney islands.

Ever a poet as well as an explorer, Col. Gellison recently composed the following dirge to the late lamented champion:

Oh, he was a famed wisecracker,
A sleek and handsome kiddo:
But one day he bothered a shark;
His only survivor: A squidow.

Col. Gellison declined to comment further on his plans, except to say that Honolulu is about to hear a fish story it can tell for many a day.

"Det er April den foerst," he said in pidgin Norwegian as he tore the March page from his calendar.