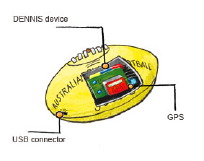 Google Australia announced it had partnered with the Australian rules football league to develop the gBall: