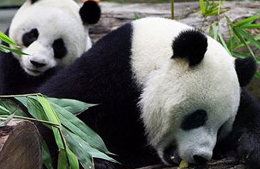 The Taipei Times reported that pandemonium broke out at the Taipei Zoo when it was discovered that the zoo's two panda bears were in fact "Wenzhou brown forest bears that had been dyed to create the panda’s distinctive black-and-white appearance." Suspicions were first raised when it was observed that the bears were spending almost their full waking hours having sex. (Pandas are notorious for their low libido.) This behavior caused chaos among zoo crowds. "Children screamed and parents became irate."

The pandas had been received as a gift from the Chinese government. "Some angrily compared the subterfuge to last year’s contaminated milk scandal, when melamine that had been added to watered-down milk sickened 300,000 victims across China and led to a recall of diary products in countries including Taiwan." Chinese foreign ministry spokesman Qin Gang was said to have issued a statement: "We understand that our compatriots in Taiwan are very upset. We wish to assure them that we have taken steps to address their concerns. We hope that our Taiwanese friends enjoy the gift of two extremely rare Wenzhou brown forest bears."