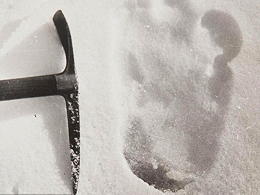 Eric Shipton's Yeti footprint photos, taken on his 1951 Everest expedition, are going up for sale. These photos played a big role in Bigfoot history since it was these photos that inspired a Yeti craze in the media during the 1950s, which then fed directly into the Bigfoot craze that started when giant-size footprints were found in California in 1958.

Unlike the footprints found in California, which were a hoax, the prints Shipton found probably were genuine, but misinterpreted. The most likely explanation is that they were bear prints that grew larger as they melted in the sun. Not Yeti prints.