Yet Another Nessie Theory: She’s a Sleeper Shark

Alaska biologist Bruce Wright, writing in the Alaska Dispatch, offers a new theory to explain Nessie sightings — as well as sightings of 'monsters' in other lakes, such as Alaska's Lake Iliamna. He thinks people may actually have been seeing Pacific Sleeper Sharks. Despite the name, this type of shark is found circumglobally in northern waters and could have made its way into Loch Ness. Wright elaborates:

The idea of sharks possibly using Loch Ness is not new; that's long been one of the hypotheses explaining the Loch Ness Monster. But until now, nobody has suggested sleeper sharks, perhaps because they're secretive and so rarely seen.
Sleeper sharks can exceed 20 feet and weigh upwards of 4 tons. Sleeper sharks probably use rivers and lakes to find food, and there is an abundance of salmon and other fish in Loch Ness and Lake Iliamna.
Sightings are often consistent with descriptions of sleeper sharks in that the monsters' shape and colors usually match that of sleeper sharks. Salmon and lots of other prey species have been found in sleeper sharks' stomachs.
He's planning an expedition to Loch Ness in 2013 to see if he can catch a sleeper shark there on video. Given how many other people have tried and failed (or tried and hoaxed) to get photographic evidence of large marine animals there, he has a difficult task ahead of him. 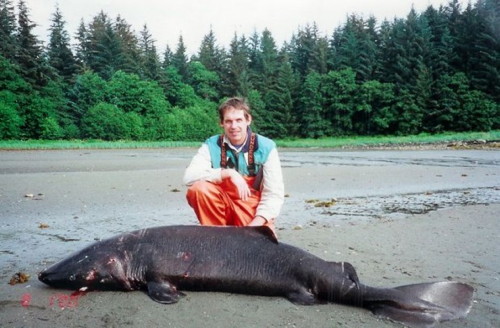 Another possibility is this is a form of freshwater shark like the sleeper that has adapted to lake conditions. It would be interteresting to find out if there is any fossil record of large freshwater sharks as surely with such an inviting niche they must have existed.
Posted by Tony Lucas  on  Fri May 11, 2012  at  05:04 PM
A skeptic (say, me) would argue that one should demonstrate the existence of Nessie before arguing about her species. No one has ever presented compelling evidence of a Loch Ness monster in the first place.
Posted by Carl Fink  on  Sat May 12, 2012  at  07:58 PM
Commenting is not available in this channel entry.