My Trip to Willow Creek, Bigfoot Capital of the World

This weekend I returned from a two-week roadtrip with my wife through Northern California and Oregon. One of the places I made sure we stopped was Willow Creek, located in the forests of Humboldt County. I figured I had to make the effort to go there since, despite the town's tiny size (the sign you see as you enter the town lists its population as 1743), it bears the distinction of being the Bigfoot capital of the world. 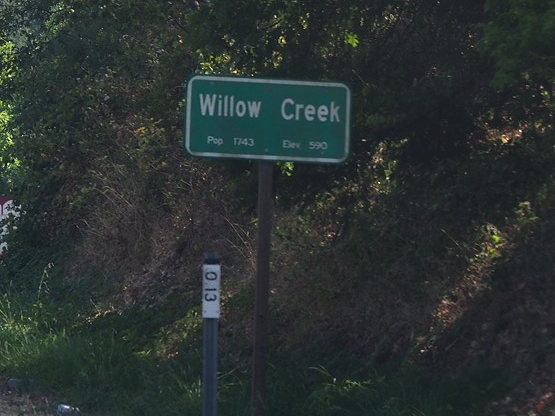 The history of Willow Creek is intertwined with the history of Bigfoot. It was near Willow Creek in October 1958 that road-crew worker Jerry Crew made a plaster cast of a giant footprint, which he then took to the offices of the Humboldt Times, whose reporting of his find coined the term Bigfoot and launched the Bigfoot craze.

The first expeditions to find Bigfoot were based out of Willow Creek, with the Bigfoot hunters staying at Wyatt's Motel, which has now renamed itself the Bigfoot Motel.

In 1960 the town launched the "Bigfoot Daze" celebration, which continues to be held every Labor Day weekend.

When Patterson and Gimlin made their famous film of a Bigfoot in 1967, the first place they stopped to report their discovery was Al Hodgson's general store in Willow Creek. And Hodgson's store remained the central place people came to report sightings for many years.

And in 2000, the town opened the Bigfoot Museum. Or, more accurately, the "Bigfoot Collection." The collection is a permanent exhibition located in one large room within the Willow Creek China Flat museum, whose primary purpose (ostensibly) is to display exhibits about the history of the region. I'm guessing that 99% of the museum's visitors now come for the Bigfoot stuff.


* * *
My first stop in town was the Bigfoot Museum, where I posed with the giant redwood statue of Bigfoot outside the museum, as every tourist does. 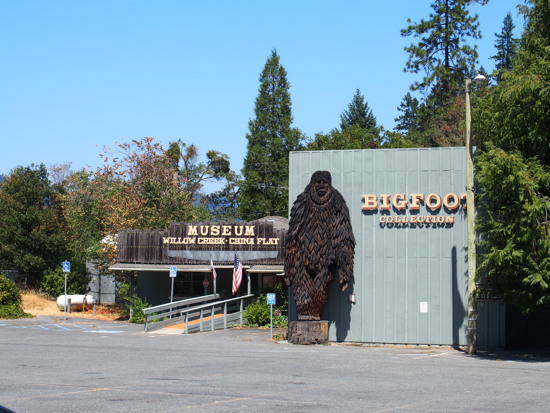 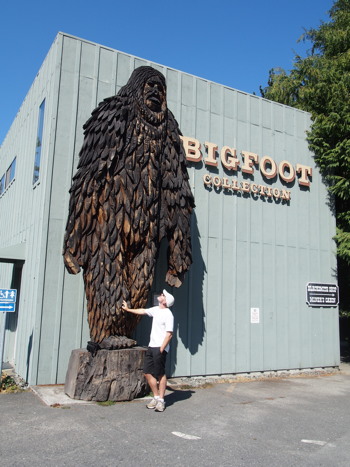 Then I spent some time checking out the exhibits inside. Admission is free, although they do ask for donations. Their Bigfoot material comes largely from the collection of Bigfoot researcher Bob Titmus. So it doesn't offer much in the way of skepticism about Bigfoot. What it does have is a number of original newspaper clippings, some Bigfoot hair, various Bigfoot-themed items from popular culture, and lots of casts of Bigfoot prints. 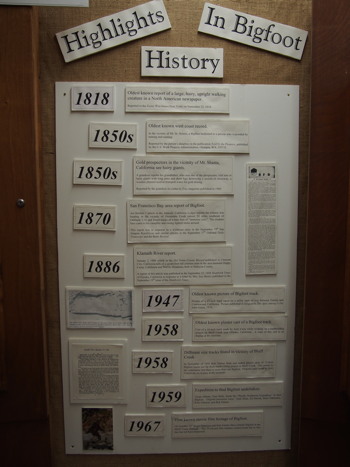 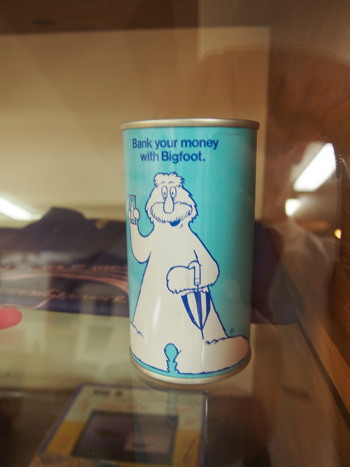 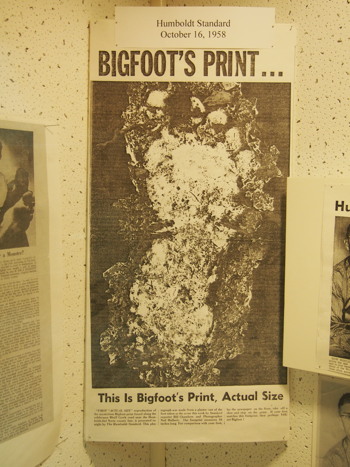 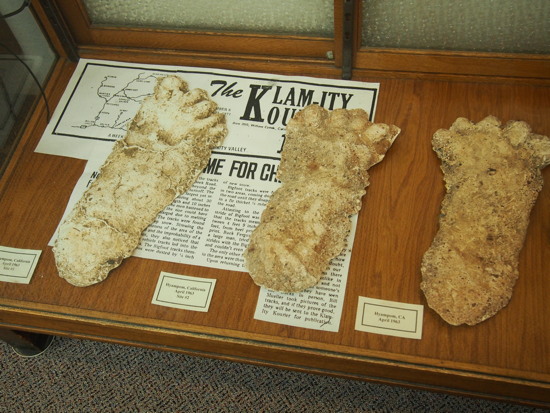 Afterwards I got a picture of the Bigfoot Motel, where all the researchers used to hang out. But I didn't stay there (it doesn't get very good reviews). Instead, I spent the night at the Coho Cottages, which turned out to be very nice. 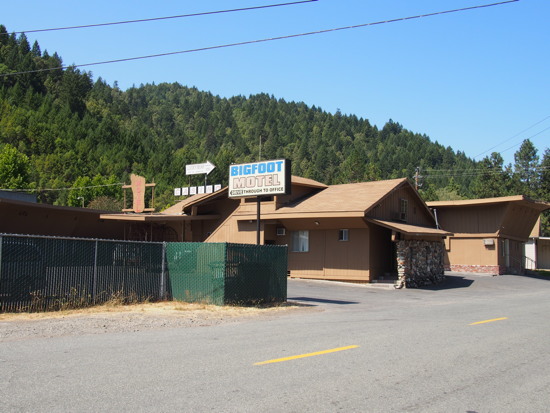 The next day my wife and I did some hiking and then explored the town more. It seems like every business in town has exploited Bigfoot's potential as an advertising icon. So you have the Bigfoot restaurant, Bigfoot Rafting, Bigfoot Equipment, etc. 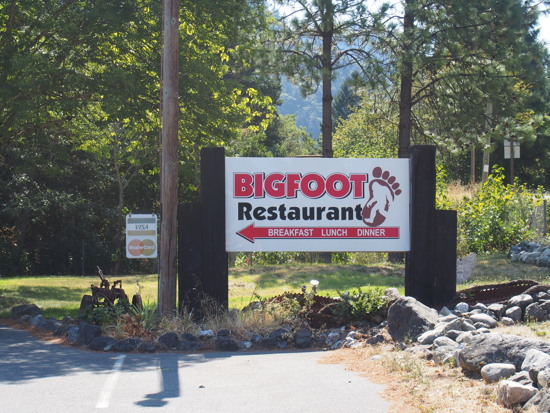 A Bigfoot statue by a Patriot gas station: 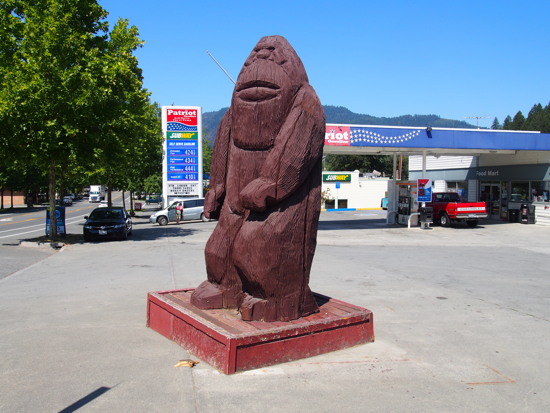 Below is the "Oh-Mah" Bigfoot statue outside of the Willow Creek visitor information center. This statue was carved in 1967 by Jim McClarin, and for years was the most photographed thing in the area. Oh-Mah is apparently the word for 'Wild man of the forest' in the Yurok language. 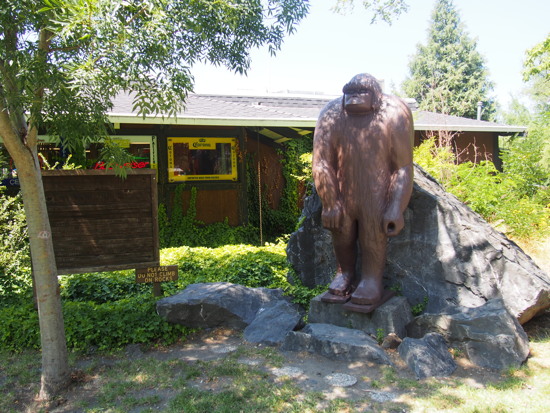 There's also a Bigfoot Avenue, as well as a Little Foot Court: 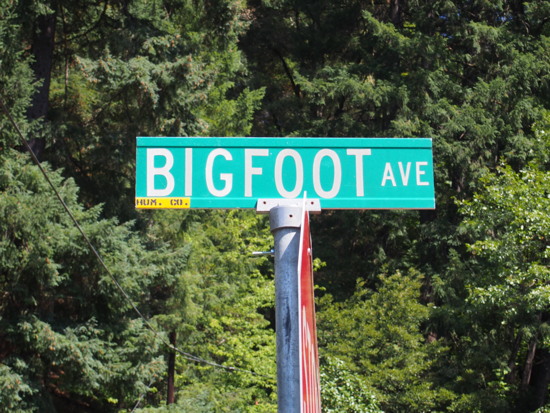 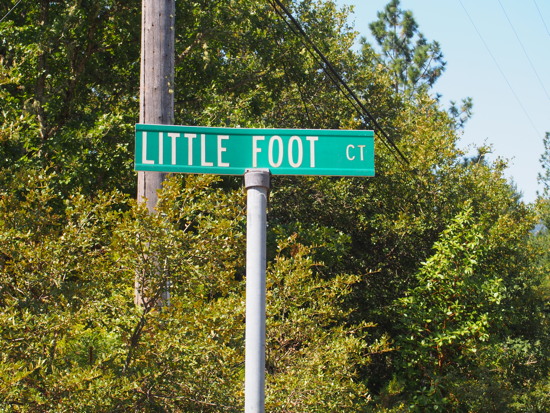 Patterson Rd. intersects with Bigfoot Ave. I'm not sure if the road is named after Roger Patterson of the Patterson-Gimlin film, but I assume so. 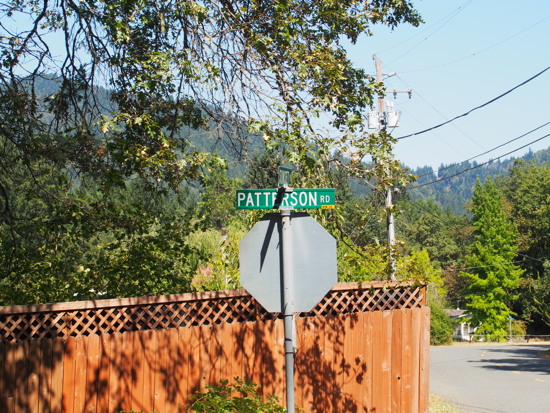 I had really been hoping to check out Bigfoot Books, since its website claims that it specializes in "SASQUATCHIANA." But unfortunately it was closed all day, even though its hours indicated it would be open. I'm guessing that the store doesn't get a lot of foot traffic (it's located about a mile outside of the town), so its owner (Steven Streufert) probably keeps irregular hours. 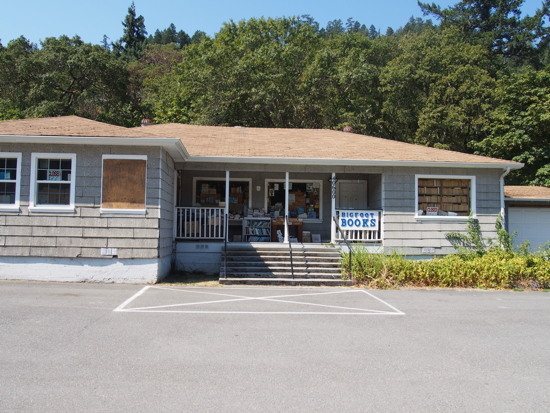 So that was Willow Creek. The one thing I missed, of course, was seeing the Big Guy himself. Maybe next time.