Why do people cling to false beliefs? 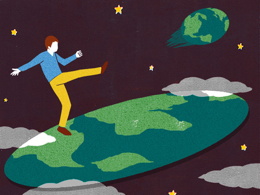 According to Dartmouth professor Brendan Nyhan (as reported by Maria Konnikova in the New Yorker), "persistently false beliefs stem from issues closely tied to our conception of self." So in order to change deeply held misperceptions, it's useless to present people with facts and information. Instead, you need to "target people’s beliefs about themselves."

This recalls what's long been known by hoaxers, that it's easy to fool people if you just tell them what they want to believe. That is, people readily accept ideas that complement their pre-existing view of the world and of themselves.

I also recall an old finding from social psychology, that people who rate low on self-confidence tend to have far more realistic views of the world, because they're willing to admit that they might be wrong. Whereas highly confident people have a hard time accepting the idea that they could be wrong about anything. So once they latch onto an idea, no matter how stupid it might be, they cling to it.

This makes perfect sense. I grew up in an insular environment, surrounded by people with little self-awareness or desire to learn about the world outside my little village.

I once believed that I was the ancestor of a man made by a super-powerful ghost who created him out of mud, then tore him open, pulled out a rib, rubbed it in the dirt and made him a wife.

When I moved out of that remote place and saw the rest of the world, my concept of self changed drastically, and I used the impressions and facts learned in my growth the build my own worldview. I no longer believed such silly ideas, nor anything else I had been told as a child.

Thank goodness for low self-confidence, then, if it has allowed me to be flexible in my intellectual development.
Posted by Mike B  on  Sat May 24, 2014  at  01:30 PM
Commenting is not available in this channel entry.