What happens when lightning strikes sand

In June 2013, the image below started to circulate online. It was launched into viral status after being posted on Reddit, where it was captioned, "This is what happens when lightning strikes sand." 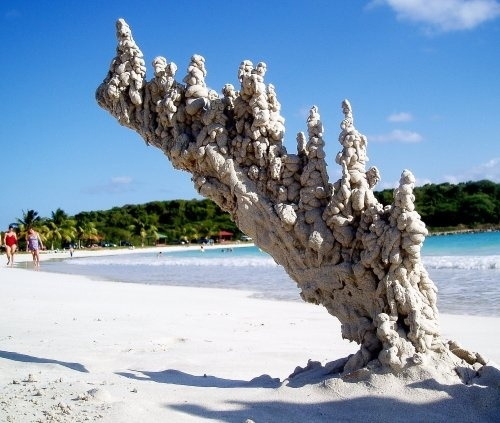 When lightning strikes sand, it can form fulgurites, which are also known as "lightning tubes" or "petrified lightning". Tonya Clayton offers a good, one-sentence explanation of what these are:


"If the in-ground moisture content is just right, the sand melts and fuses, forming beautiful glassy tubes whose branches record the lightning's path."
-How to read a Florida Gulf Coast Beach
Is that thing in the picture a fulgurite? No, it isn't. The picture has been falsely captioned.

Fulgurites form within the sand, and only appear above it if the sand erodes away around them. A fulgurite of that size would be extremely valuable, and most likely would already have been carted away to a museum. It wouldn't be sitting on a beach surrounded by holiday-goers, any one of whom could potentially break it.

What the image really shows is a piece of driftwood with sand piled on top of it.

The structure was created and photographed by a guy who goes by the name "Sandcastle Matt" on his Flickr photostream.

He described the structure as "the biggest sandcastle I've ever made." The viral photo showed less than half of it. Here's the full thing: 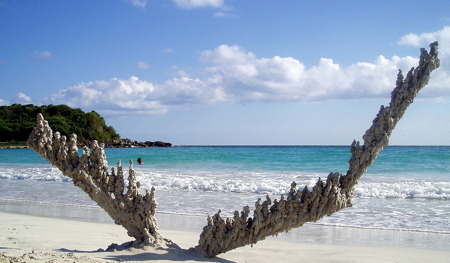 And here's Sandcastle Matt at work creating another sandcastle. 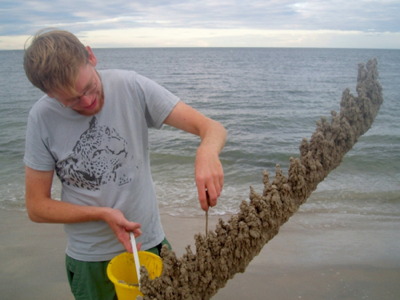