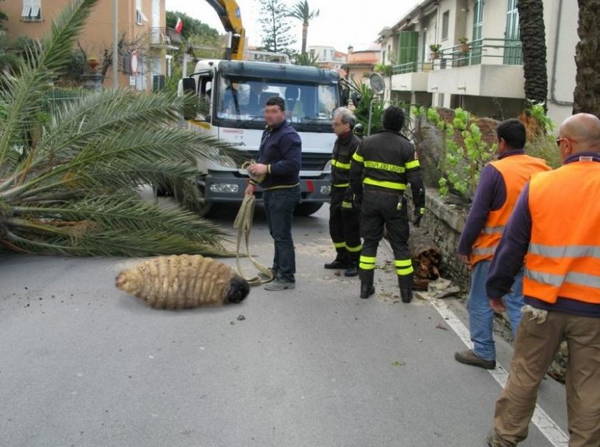 An Italian newspaper has reported that firefighters near Naples recently discovered a giant larva of a Red Palm Weevil (Rhynchophorus ferrugineus). The larva, which was as big as an adult pig, was still alive, and as the firefighters approached it, the thing emitted a shrill cry similar to the whinny of a horse.

The larva appears to be a result of "radioactive gigantism" caused by toxic waste in the so-called "Land of Fires" region of southern Italy. It has been taken to the Naples Museum to be studied by entomologists.

At least, this is what I could understand of the story with help from Google Translate. (Any corrections/additions from Italian speakers would be appreciated!) The entire story, of course, is baloney. But I like the photo.

Wikipedia offers this information about the Red Palm Weevil:


The red palm weevil, Rhynchophorus ferrugineus, is a species of snout beetle also known as the Asian palm weevil or sago palm weevil. The adult beetles are relatively large, ranging between two and five centimeters long, and are usually a rusty red colour - but many colour variants exist and have often been misidentified as different species (e.g., Rhynchophorus vulneratus;). Weevil larvae can excavate holes in the trunk of a palm trees up to a metre long, thereby weakening and eventually killing the host plant. As a result, the weevil is considered a major pest in palm plantations, including the coconut palm, date palm and oil palm.