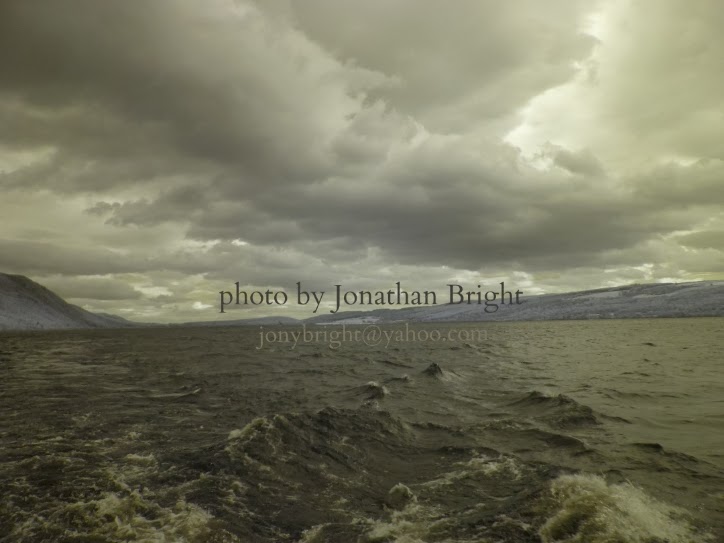 If I were to make a list of the Worst Nessie Sightings Ever, Jonathan Bright's Nessie photo would have to be near the top of the list. To me it looks like a wave. Plain and simple. And yet he's managed to successfully promote this thing (and himself). He was a featured speaker at Scotland's first Paranormal Festival where he discussed the photo, and most recently his Wave-Nessie was the subject of a write-up in the Daily Mail.

Bright took the photo on Nov 2, 2011 while taking a cruise of Loch Ness. That happens to be the same day that the skipper George Edwards [edit: claimed he] took a Nessie photo that he later revealed to be a hoax. (See the list of Nessie Hoaxes.) But Bright insists that's pure coincidence. [edit: not exactly. Edwards's sighting, Bright explains, is what made him re-examine his photos from that day.]

Bright admits that he didn't immediately notice the presence of Nessie in the photo, and he definitely didn't realize Nessie was there while he was taking the shot. It was only a few days later, as he was examining his photos, that he realized that if he zoomed in on one particular wave, it kinda/sorta looked like the head of a "water horse." Fiddling around with the brightness and contrast helped to accentuate the thing. Also, the picture was taken with an infrared camera, so the colors in the picture were different than what they looked like to the naked eye. (Bright claims it's the first infrared image of Nessie.) 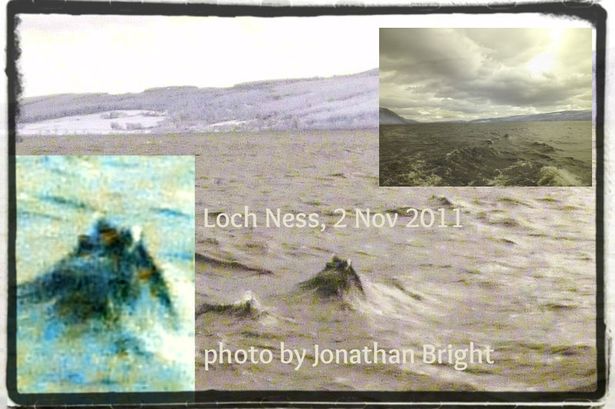 Bright's Wave-Nessie photo came to the attention of a larger audience when it was included in a Nov 2013 issue of Fortean Times, and Nessie believers were then quick to latch on to it.

I actually don't think his photo is a hoax. I would describe it as a case of pareidolia. He's attributing meaning to a random pattern of shadows in a wave.

Bright has addressed the criticism that the object in the photo is simply a wave, and his argument seems to boil down to the conviction that pareidolia is not an adequate explanation — that if a wave looks vaguely like the head of Nessie that must be because it really is Nessie's head! Any other explanation would be "too much for a coincidence."


The 'wave/wake' scenario has been discussed at large in my Fortean Times article, where in fact, I do agree that an explanation of a wave simulacrum could be possible. But, as I mention, the problem with this is that, if we agree to accept that not all the Nessie reports are hoaxes or misidentifications and there really is something strange that every now and then people see in the Loch, then according to the Occam's Razor principle, wouldn't it be more likely that what has been captured in the picture is that very same ‘creature’ and the origin of the 'Loch Ness monster' tales, rather than a tricky momentary water sculpture that happens to look like a monster coming out of the water, caught as my finger happened to click the snap button in the single moment that it would have lasted, before the next instant collapsing and be forever gone?... I mean, what if the 'object' looked like some other, more plain creature, a seal, for example, wouldn't it be easier to think that what appeared in the picture was indeed a seal, rather than an amazing liquid idol perfectly mimicking a marine mammal known to inhabit these waters?

Some will protest that with a seal it would be different, since we know beyond doubt that such mammals exist. This is why we have made that initial assumption that a loch ness 'monster' (whatever its nature may be) that is responsible for all those tales and legends at the Loch, really exists… But that simply means that, in the end, it simply gets to whether one believes that 'Nessie' exists, or not. For someone who accepts that she does, then the skeptical way of thinking would suggest that it is the 'monster' captured on this photo, whereas for those who are not convinced of her existence, then the photo could be either accepted as a clue, or perhaps interpreted as an exceptionally strange simulacrum.

But even those who doubt the presence of some kind of 'monster' at Loch Ness could not explain how such a simulacrum showing, not a mermaid, or a unicorn, or even something more realistic, such as a seal or a dolphin, but a strange monster-like head coming out of the water, happened to be randomly formed and snapped at that very Loch which is worldwide famous for its monster... Sure, at times waves can take unusual and even awesome shapes, like for example the gigantic human head that has recently received worldwide coverage by the media as something extra-ordinary, but, ...a monstrous head coming out of the waters of Loch Ness? Isn’t it just a bit too much for a coincidence?

I wonder how Bright would explain something such as the dragon's head in a flame in the photo below, taken by photographer Noel Celis. Because the flame looks like a dragon's head, does that mean it's evidence of the actual existence of Fire Dragons?


#137515594 / gettyimages.com
It's worth noting that Bright believes Nessie to be a paranormal entity. To my mind, that's a roundabout way of admitting that Nessie as a flesh-and-blood creature, which has to play by the rules of physics and biology, doesn't exist.

Looks more like a Bigfoot surfing to me!
Posted by Chan  on  Fri Nov 07, 2014  at  10:03 AM
"Bright took the photo on Nov 2, 2001 while taking a cruise of Loch Ness. That happens to be the same day that the skipper George Edwards took a Nessie photo that he later revealed to be a hoax. (See the list of Nessie Hoaxes.) But Bright insists that's pure coincidence."
My photo has been taken on Nov 2, 2011. That was the same day that Edwards CLAIMED to have taken his photo (we don't know when he had taken it, but certainly not that day). That's certainly no coincidence, since it was reading his claim that made me go back to my archive and run a more detailed check of the photos I had taken that day. For me this is a strange synchronicity that adds to the possibility of a 'paranormal' explanation...

Some people, including at least one skipper of a cruise boat in Loch Ness, believe it's a wave. I have asked for a photo of another wave with these characteristics that may be captured there. I still haven't seen any...

"I wonder how Bright would explain something such as the dragon's head in a flame in the photo below, taken by photographer Noel Celis. Because the flame looks like a dragon's head, does that mean it's evidence of the actual existence of Fire Dragons?"
If the photo had been taken in a cave called "dragon's lair" in which in the last 80+ years there were several reports of "fire-dragons" then, possibly, yes. And then I would try to understand exactly what the phenomenon called "fire-dragon" is...

"pareidolia" works both ways. It can explain seeing things that are not really there. But it can also explain not seeing things that are...
Posted by Jonathan Bright  on  Mon Nov 10, 2014  at  08:15 PM
Jonathan, thanks for the comments, and correcting the date typo I made. I added some edits above to correct where you offered clarification.

As for the fire dragon photo, perhaps it's worth noting that it was taken at a Chinese New Year celebration, and there's a long history of dragons in Chinese mythology. So given the historical context, would this make it more likely, in your mind, that the photo shows an actual dragon manifesting itself? Maybe a dragon spirit? Or maybe it's just a random pattern in a flame.

I would argue that the historical/social context influences our mind to see particular shapes in random patterns. So people look at shadows or stains on the side of churches and end up seeing shapes that look like the Virgin Mary. Because that's what they want to see in that setting.

And you looked at Loch Ness waves and ended up seeing the head of Nessie. Because that's what you wanted to see there.

Posted by The Curator  in  San Diego  on  Tue Nov 11, 2014  at  07:27 AM
"I would argue that the historical/social context influences our mind to see particular shapes in random patterns. So people look at shadows or stains on the side of churches and end up seeing shapes that look like the Virgin Mary. Because that's what they want to see in that setting."
The historical/social context may to some extent influense our mind to see particular shapes in random patterns. Could this influence reach to such length as to actually project externally and even temporarily materialize these shapes? Tulpas, thoughtforms, thoughtographs are just a few names that have been used to describe these conscious or subconscious products in various relevant approaches. Just theories? They may be, but we also know of the Quantum approach, according to which the observer participates in the formation of reality... So, to reply to your question, I don't know if there are traditions speaking of dragons that really appear during the Chinese New Year parades (other than the man-made ones), but with all the minds set to such archetypal forms, the effect might could be examined in relation to the different approaches/names that I have mentioned...

People don't see Jesus Christ and Virgin Mary only in churches, but everywhere... On leaves, on apples cut in two, on the cream of a cappuccino... Are these acheropita products of just the power of imagination? How does one define the exact limits between objective and subjective? About four decades ago, writer John Michell was arguing that we have been programmed to respond to certain forms that nature is also programmed to repeatedly manifest. Is there some secret language of communication between ourselves and nature?...

As for me, if you had asked me to sketch 'Nessie', until I saw my image, I don't think I would have drawn horns. On the other hand, the stereotype image of the "Surgeon" neck coming out of the water that had been imprinted in my mind for so many years (and which despite being a hoax is still reproduced in every Loch Ness article), did not make me see (even for a second) a 'Nessie' on the object that I had spotted last week, while investigating the Loch... http://www.scotlandnow.dailyrecord.co.uk/news/latest-loch-ness-monster-sighting-4607925
Posted by Jonathan Bright  on  Tue Nov 11, 2014  at  12:51 PM
Commenting is not available in this channel entry.