Vitamin Donuts are a notorious case in the history of misleading advertising. In 1941, the Doughnut Corporation of America came out with these "Vitamin Donuts," hoping the product would earn a seal of approval from the Nutrition Division of the War Food Administration. The name was justified, so the Doughnut Corporation believed, because the donuts were made with flour fortified with thiamine (Vitamin B1) which, so the marketing posters promised, would provide "PEP and VIGOR."

However, the War Food Administration didn't buy this argument and told the company that the name was misleading, because it was only the flour that was enriched with vitamins, not the entire donut. If they allowed Vitamin Donuts, then anything made with enriched flour could theoretically be a Vitamin product — Vitamin Cake, Vitamin Bread, Vitamin Cookies, etc.

The Food Administration suggested the name "Enriched Flour Donuts" as an alternative, but the Doughnut Corporation didn't think this sounded appetizing, so they dropped the product entirely. 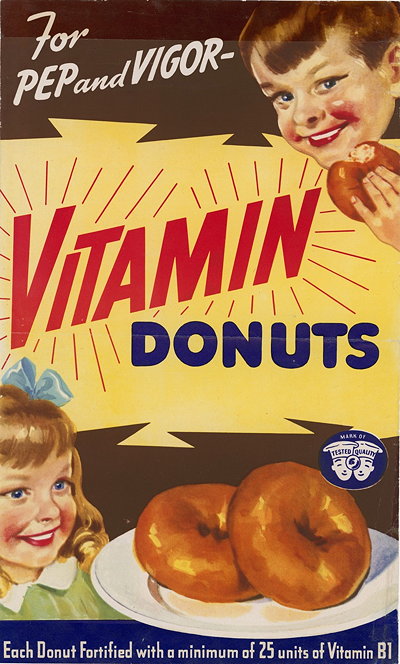