Unterstitzen on the Bleiweis—the German town that was never taken 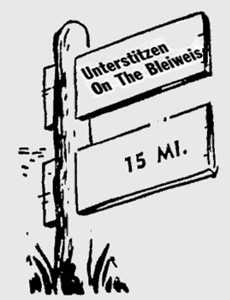 In the first months of 1945, the Allied forces began advancing rapidly on Berlin. But to the press correspondents tagging along behind the military, it seemed as if the going was actually quite slow. They had thought they would be in Berlin in a few days, but instead officers kept telling them that Berlin would be reached soon, but there was just one more stream, one more creek, one more canal, one more small river that had to be taken first.

And the story goes that one day the following scene took place. I'll quote directly from the 1945 AP story for the rest:


Once a group of war correspondent was being briefed at the division command post by the commanding general himself. He outlined the battle situation and the progress of his men and then looked around for questions.

"That's great, general," said Johnny Florea of Life Magazine, "but when will your troops take Unterstitzen on the Bleiweis?"

"What town was that?" asked the general, peering uncertainly at his map.

"Oh," said the general confidently, with a wave of his hand toward the map, "my men will take it in a couple of days at most."

After he left, his public relations officer came over to the grinning correspondents and said with a puzzled expression:

"Say fellows, just why are you so interested in this Unterstitzen on the Bleiweis place?"

"There is an eight-story subterranean hotel there," answered Florea gravely. "Seven stories and big underground penthouse on the bottom. It's absolutely bombproof and shellproof. We want to use it for our press headquarters."

"Don't worry boys," he said. "We will take care of you. I will grab off that hotel for you myself just as soon as we take the town."

But so far — although many days have passed — no American troops have entered that last German stronghold of the war — historic, quaint, picturesque, cobblestoned old Unterstitzen on the Bleiweis.
[Deseret News - May 16, 1945]