For 100 years, a package marked "May Be Opened in 2012" has been sitting in a museum in Otta, Norway. It was given to the town of Otta by a local resident, Johan Nygaard, back in 1912. There's been enormous speculation about what the package might contain. Money? A diary? Stock certificates? 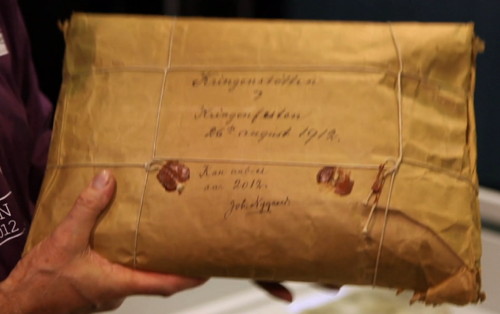 Finally, last Friday, the 100-year-mark arrived, and the town gathered to open the package. There was a live video feed, so the entire world could share in the excitement. The mayor carefully opened the package, peeked inside... and it turned to contain: "not-too-valuable notebooks, newspaper clippings, community council papers, a letter, small drawing and other bits of paper." In other words, nothing of any value. [time.com].

Some of the newspapers were dated 1914 and 1919, which means someone must have opened the package after 1912 to put them in there. Perhaps they removed whatever was in there and inserted junk in its place.

The affair reminds me the bequest of Francis Douce. When he died in 1834, Douce, who was a wealthy collector, willed a box to the British Museum with instructions that it be opened on January 1, 1900 — in 66 years. The British Museum did wait, as instructed, but when they finally opened the box, it contained nothing but a bunch of worthless papers. According to rumor, there was also a note from Douce in the box explaining that he thought it would be a waste to leave anything of greater value to the philistines at the British Museum.

I wonder if Nygaard had heard of Douce's bequest? He might have read about it in 1900 and decided to do something similar. Probably not. But it's a possibility.

This reminds me of Louis Mantin who bequeathed his entire mansion to the French public in 1905 on condition that it only be re-opened 100 years later. I believe it's a museum now, full of early 20th century stuff and gadgets (as he was quite interested in all the new-fangled inventions of the time).

It's somewhere near Paris I think.
Posted by Piltup  on  Thu Aug 30, 2012  at  05:24 AM
The article I'd read stated that the package was created in 1912(not necessarily sealed in 1912)and that the creator kept it for several years before giving it to them...apparently adding to it on occasion.
Posted by Tricia  on  Sun Sep 02, 2012  at  10:03 PM
Mr. Nygaard was actually the mayor of Otta in 1912.
That's why we thought the package might have conteined something interesting.
Posted by eovti  in  Sandefjord, Norway  on  Mon Sep 10, 2012  at  01:11 PM
It's a shame that this time-capsule was only deemed to contain "worthless pieces of paper". It should be turned over to a local historian, which was probably the intended purpose. Who's to say if someday, faraway aliens might retrieve one of our Voyager spacecrafts, and then decide that it was only a worthless piece of space-junk?
Posted by danny53  on  Wed Sep 12, 2012  at  10:27 PM
Has there been a followup to this story?

The package is back in the hands of the museum, right? Have they released any statements on the details of the notebooks and stuff? Or any theories on why Nygaard preserved so carefully this particular collection of documents?
Posted by AndyL  on  Tue Sep 18, 2012  at  05:11 PM
No, AndyL, no word from the museum so far. Maybe some local alive today has heard something about what kind of guy the Mayor was. Did he have any special interests? Did he do any pranks while alive?
Posted by eovti  in  Sandefjord, Norway  on  Wed Sep 19, 2012  at  10:49 PM
I think is this a prank or something else??? waiting for 100 years to open a package is really interesting!!!
Posted by buddha boy hoax  on  Sat Dec 01, 2012  at  01:25 AM
Seems that it *did* indeed contain something interesting (and likely valuable) - and that its original contents were stolen and replaced with papers. Perhaps it might still be possible to find out who had access to the package in that very first decade...
Posted by Sawyer  on  Mon Jan 14, 2013  at  04:37 AM
Commenting is not available in this channel entry.