Throughout much of the 20th Century, the following anecdote (in various forms) ran in many newspapers:


Outside a power station is a sign reading: "To touch these wires means instant death. Anyone disregarding this notice will be placed under arrest."
But where exactly did this sign hang? That's not clear. Or rather, if we're to believe all the various newspaper accounts, the sign popped up in many different locations.

The earliest version of the story that I've been able to find, from 1911, has the sign posted at a municipal electric power plant of a town in the south of Germany. 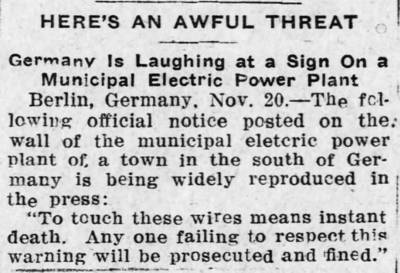 A year later, the trade journal Power reported that the sign was hanging at a Boston electric power house. 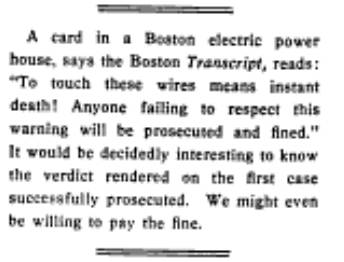 And by the early 1960s, the sign had moved to a power station in Illinois. 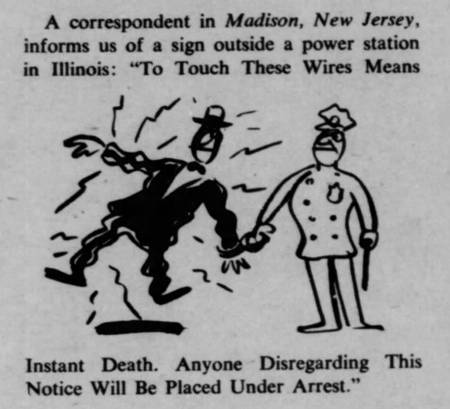 My suspicion is that the sign was never posted anywhere, because the story reads like a joke that was transformed into a supposedly factual news story. A location was added to create verisimilitude. As Gail de Vos notes in Tales, Rumors, and Gossip


references to place serve to establish authority in news reports and to make the event concrete in the minds of readers. References to setting give readers a sense of connection with the community. Tabloid journalism adopts the legends and sets them in the most 'effective' settings. To satisfy the enormous demands of their readers for new stories, tabloids often recycled old tales with new dates and locations; undoubtedly they did much of this recycling unintentionally, publishing and republishing the apocryphal tales that later became known as 'urban legends'.
In the case of the "touching wires means instant death" story, the original joke evidently poked fun at official regulations that lacked common sense — a well-established subject of humor. Placing the sign originally in Germany made sense, since the Germans were well known for their love of rules.

The story also demonstrates the popularity of "weird signs" as a genre of humor — a genre still very much alive on the Internet.

Of course, there's also the possibility that this sign really was once hung at a power station, but that it was done as a purposeful joke. Or perhaps a confused sign writer did post such a sign, not intending it as a joke, but the report of the sign then turned into an urban legend once the location began changing for different audiences.

The best contemporary example is probably the Newcastle Tramway Authority sign and its $200 fine; image search that name to instantly find it. Most comment on it as if it were real, but the only references to the NTA name are on pages that include that picture - where you'll note the sign has mounting holes but is not mounted - so it's doubtful any such agency ever existed.

Newcastle in New South Wales did have a tram system, but it was called the Metropolitan Newcastle System and shut down in 1950, some 16 years before Australia switched from the pound to the dollar. I'll wager a crisp new one dollar bill - or perhaps a fifty-year-old one pound note - that it's a novelty sign someone spotted in a Newcastle waterfront gift shop.
Posted by Mike  on  Sat Apr 18, 2015  at  11:18 PM
I remember seeing a very similar sign on a class trip to London Canada's Fanshaw Dam when I was a boy and getting quite a kick out of it. If I remember correctly, it went like "WARNING, INSTANT DEATH, 12,000 VOLTS, $10,000 FINE".
Posted by Max Stewart  on  Mon May 11, 2015  at  01:02 PM
Up until a little more than fifty years ago, suicide was illegal in the UK. Those who failed faced a fine and/or imprisonment.
When I was growing up a local grocery had signs put on the parking lot lampposts that proclaimed: "Parking For Customers Only. Violators Will Be Persecuted." Pointing them out to adults as humorous usually resulted in a lecture on the seriousness of obeying the law. It was like "The Emperor's New Clothes". All we grade-schoolers could do was shake our heads and say, "Gosh, grown-ups are so dumb."
Posted by Eoin  on  Fri Jul 31, 2015  at  11:23 AM
Commenting is not available in this channel entry.