Tom Thumb’s baby not a hoax? 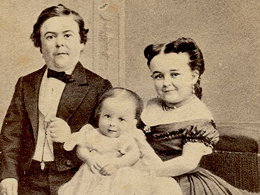 It says here that in a recently aired BBC documentary, The Real Tom Thumb, historian John Gannon argues that Tom Thumb's baby may not have been a hoax, even though Tom Thumb's wife Lavinia confessed it was a hoax in her autobiography. The article cites certain "paper evidence" that suggests the baby may actually have been the natural child of Tom and Lavinia.

Sounds like an interesting argument. Unfortunately I can't watch the documentary as it won't stream for people outside the UK. Hopefully it'll be available in the future on Netflix or YouTube.

The obvious question is how did Lavinia give birth to a normal-sized baby?

If you want a work-around you can try using the Hola extension with Firefox to route through a UK proxy. It works pretty automatically, though you may have to reload the page a few times to get it to finally work.
Posted by Charybdis  in  Hell  on  Wed Nov 26, 2014  at  09:45 AM
Charybdis -- I'll try that. Thanks!
Posted by The Curator  in  San Diego  on  Wed Nov 26, 2014  at  06:33 PM
It was an interesting documentary overall. The bit about the baby came in the latter third and the evidence wasn't terribly convincing. Lavinia never appears to have been pregnant, and it seems more likely that a baby Barnum hired to masquerade as theirs died and was buried as theirs, with presumably an enormous payoff to the real parents.

Still the doc was very informative about their lives and I enjoyed it.
Posted by Charybdis  in  Hell  on  Thu Nov 27, 2014  at  08:31 AM
Commenting is not available in this channel entry.