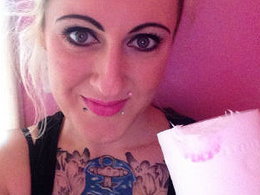 Jade Sylvester is a 25-year-old mother who craves eating toilet paper. She eats up to a roll a day. Her hankering for loo rolls began when she was pregnant, but didn't go away after she gave birth. She says that she often holds off going to the bathroom, because she knows that once she's there she'll start eating the toilet paper.

Jade's story is the kind of offbeat human-interest tale that the media loves. And sure enough, the story has now appeared on a whole bunch of sites: NY Post, News.com.au, Huff Post, The Mirror, Metro, Lincolnshire Echo.

But if you follow the story back to its original source, as The Awl has done, it leads to a somewhat dubious source — a press agency called Sell My Story that's in the business of supplying news stories to British papers. It actively solicits weird stories from the public, offering fairly substantial fees for good ones.

The toilet-paper-eating mom story apparently was a result of seeking out stories about weird cravings or food habits.

Now it could be that Jade really does have this craving to eat toilet paper. If so, she suffers from pica, which webmd defines as "the persistent eating of substances such as dirt or paint that have no nutritional value." Having such a craving can be dangerous, and needs treatment, because as webmd also notes, "Eating non-food objects can interfere with eating healthy food, which can lead to nutritional deficiencies."

On the other hand, it could be that Jade made the whole thing up, or is greatly exaggerating her craving, in order to get the story fee from Sell My Story. There's no way to tell because the article offers no means for authenticating its claims. You just have to take Jade's word for it. And since Jade is getting paid for the story, there's a powerful motive for her to be spinning a fanciful, but attention-grabbing yarn.

It's dubious but to me sounds pretty plausible in a sense - probably because I've gone through something similar, though in an infinitely smaller scale. Back when I had anemia I'd get cravings for paper - especially when I was stressed out, such as in school. I'd pick bits off the edges of my notebooks and eat them for the texture rather than the taste. I'd eat up to a sheet of paper a day that way during the height of this craving. I never ate toilet paper though - it gets all mushy and disgusting when wet. If someone had a strong craving for toilet paper I'd have no reason to doubt that they could eat "up to a roll" of it.
Posted by Cliodna  in  Estonia  on  Fri Dec 19, 2014  at  10:23 AM
I had a craving for paper from I was five or six yo and up to 16 or so. I didn't eat toilet paper - for some reason that sounds gross, even if it's not used - but newspapers.

So I think this story could very well be true.
Posted by Anders Svenneby  on  Sat Jan 10, 2015  at  03:28 PM
The story seems totally believable to me. There's a whole TV series about people like her called "Freaky Eaters". I even know someone that should be on that show. A customer at the gas station I work at comes every couple of weeks and buys all the baby powder we have, and starts eating it right at the checkout.
Posted by Rev. Jason Russell Jones, Inc.  on  Thu Feb 12, 2015  at  08:31 PM
Back when I worked with adolescents in group homes, I had a client who did exactly that- eat toilet paper. Her pica was pretty strong and we limited her to one roll per day. Because of her drive, we had to control the TP for all the other clients. The worst part was trying to find a non-bleached and unscented TP that would be safe for her to eat.
Posted by Dave Eiffert  on  Tue Feb 24, 2015  at  06:03 AM
I had a serious quarrel with my husband because i was not able to give him a child, my husband left me and said to me that is over, nothing can work between the both of us. i have try everything in my power to have him back but it did not work out for me he keep on telling me that the only thing that will make come back is when i am ready to have his child. one i say let me go to the net and ask for help on how i can get my man back, that was how i met this great man LORD KAKA online, that make everything work out for me, him did a spell that make me pregnant with that reason my husband came back to me. please help me in thanking of lord kaka for his help, here is the email address if you need his help .(JavaScript must be enabled to view this email address) or call +2347053319835
Posted by Kerri Collins  on  Tue Mar 31, 2015  at  03:18 AM
Commenting is not available in this channel entry.