The Roofs of Cambridge 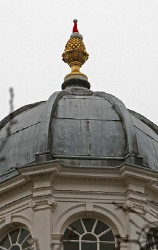 Pranksters at Cambridge University recently succeeded in placing a Santa hat on top of two seemingly inaccessible roof spires. Ten firemen and three fire engines spent an hour getting them down. From the Daily Mail:


The culprit currently remains a mystery, but it is thought to be a student playing a practical joke. It is also not known how anyone managed to scale the buildings, particularly the spire of Humility, which is thought to be impossible to climb. One suggestion is that the person used the famous book The Night Climbers of Cambridge, originally published in 1937, which offers a guide onto the roofs of the city's ancient buildings.
I hadn't previously been aware of the Night Climbers book. Here's what Wikipedia says about it:


The Night Climbers of Cambridge is a book written under the pseudonym "Whipplesnaith" about nocturnal climbing on the Colleges and town buildings of Cambridge in the 1930s. "Whipplesnaith" is apparently a pseudonym for Noel Howard Symington, although the book is the work of several contributors. One of them, Eric Wadhams, a choral scholar at King's, either took or was featured in most of the photographs...
The book is now highly sought after, especially in Cambridge itself where it is still regarded as one of few "guidebooks" to the routes onto the roofs of the town's ancient buildings.
The book may be highly sought after, but if you do a search of used bookstores on abebooks.com, quite a few copies of it are available. Plus, the entire book (with pictures) can be read online.

I suspect that the hats were taken down to discourage copycats, not because anyone seriously believed they were a danger if they fell off.
Posted by Mr Henderson  on  Tue Dec 02, 2008  at  02:44 PM
Scaling colleges and churches in Cambridge is a noble tradition. My favourite story relates to the placing of a traffic cone atop one of the spires of King's College Chapel during the night. College authorities had to call a scaffolder, who couldn't complete the scaffolding in one day (for King's Chapel is ludicrously grand). The next morning, the college awoke to find the traffic cone removed and neatly placed on the other spire at the other end of the chapel. Now that is classy...
Posted by Nick  on  Tue Dec 02, 2008  at  06:17 PM
Something similar happened at Cornell about 10 years ago. Somebody put a 60lb pumpkin on the top of the clock tower.
Posted by David Hollman  on  Wed Dec 03, 2008  at  01:40 AM
In this case, my first thought was electric radio controlled helicopter. But never underestimate what a determined college student can do and what dangers they will ignore in doing it.
Posted by Joe  on  Wed Dec 03, 2008  at  10:41 AM
Nice story, having just read a few pages of Night Climbers I can't help but think those guys would have been fairly handy in the subsequent troubles.

http://www.cai.cam.ac.uk/college/past/legend/index.php
Posted by Sesquipedalis  on  Wed Jan 07, 2009  at  08:49 AM
Commenting is not available in this channel entry.