On Monday, The Pirate Bay issued a press release on its blog announcing that it was moving to North Korea:


PRESS RELEASE, NEW PROVIDER FOR TPB
FOR IMMEDIATE RELEASE, 3 MARCH 102, 평양 (PYONGYANG).
The Pirate Bay has been hunted in many countries around the world. Not for illegal activities but being persecuted for beliefs of freedom of information. Today, a new chapter is written in the history of the movement, as well as the history of the internets...
Today we can reveal that we have been invited by the leader of the republic of Korea, to fight our battles from their network.
This is truly an ironic situation. We have been fighting for a free world, and our opponents are mostly huge corporations from the United States of America, a place where freedom and freedom of speech is said to be held high. At the same time, companies from that country is chasing a competitor from other countries, bribing police and lawmakers, threatening political parties and physically hunting people from our crew. And to our help comes a government famous in our part of the world for locking people up for their thoughts and forbidding access to information.
As part of the move, the site added a North Korean flag onto the sails of its pirate ship logo. And those who investigated its IP address found that it did indeed seem to be originating out of North Korea. 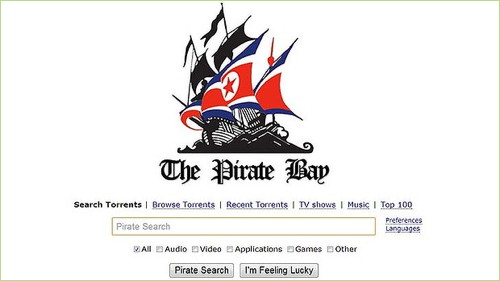 But yesterday, The Pirate Bay revealed on its facebook page that the move was just a joke. It explained the hoax as their way of demonstrating the need for critical thinking skills:


We've hopefully made clear (once again) that we don't run TPB to make money. A profit hungry idiot (points at MAFIAA with a retractable baton) doesn't tell the world that they have partnered with the most hated dictatorship in the world. We can play that stunt though, cause we're still only in it for the fuckin lulz and it doesn't matter to us if thousands of users disband the ship.
We've also learned that many of you need to be more critical. Even towards us. You can't seriously cheer the "fact" that we moved our servers to bloody North Korea. Applauds to you who told us to fuck off. Always stay critical. Towards everyone!