The Origin of the Word Quiz

'Quiz' is a relatively new word. It first came into use in the late 1700s, making it a little over 250 years old, and there's a curious story about its origin.

The tale goes that it emerged from a wager made in 1791 by Richard Daly, manager of the Theatre Royal in Dublin. Daly bet his friends that within 48 hours he could make a nonsense word be spoken throughout Dublin — specifically, a word having no meaning nor derived from any known language. His friends took him up on the bet. So Daly sent out his employees to write the word "QUIZ" in chalk on doors, windows, and walls throughout Dublin. The appearance of this mysterious word became the talk of the town, allowing Daly to win his bet. And it caused the word 'quiz' to pass into popular usage.

There's a number of reasons to doubt this story. For one, it first appeared in print in 1835, 44 years after the event supposedly took place. The story took the form of one of those small blurbs of trivia that newspapers and magazines used to pad out their columns. It ran in a number of publications, such as the New York Mirror (May 2, 1835), The Mirror (Feb 21, 1835), and The London and Paris Observer (Feb 15, 1835). However, it's authorship wasn't attributed, or attributed only by initials, so we have no way of knowing how the author knew his information. Perhaps a newspaper editor simply made it up. (The most elaborate version of the story is found in Frank Thorpe Porter's Gleanings and Reminiscences, 1875. Porter doubtless embellished it.) 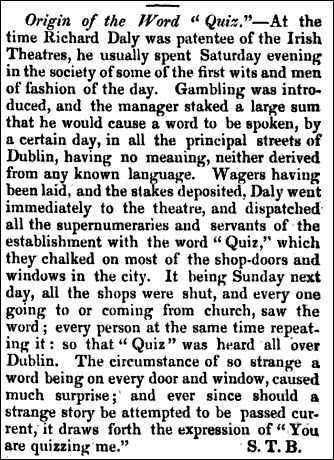 Second, it's easy to find examples of the word 'quiz' used before 1791. Here's an example from the London Magazine, Nov 1783: 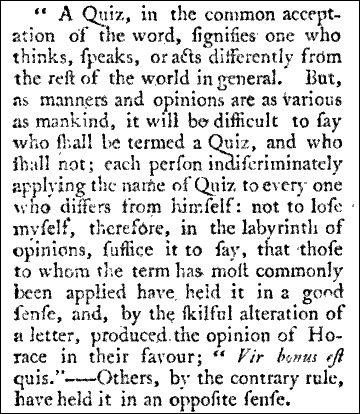 However, it's possible that Daly (or someone connected with the theater) did write the word "QUIZ" all over Dublin, but that this stunt had nothing to do with the word's origin. Back in the 1790s, Quiz didn't mean what it means today. It was a derogatory term meaning an oddball or eccentric. Or, as the London Magazine put it, "one who thinks, speaks, or acts differently from the rest of the world in general."

An article in the Sporting Magazine (Dec 1794) indicates that to call someone a Quiz could also insultingly imply they were pedantic and rule-bound. It was a bit like calling someone a Nerd or a Square:


Now every young man who wishes to attain that for which he was sent by his friends to the university, namely improvement, is immediately denominated a Quiz, and is subject to the petty insults of every buck (a species of the human kind so called in Cambridge) he meets with. To avoid the stigma of being a Quiz, young men who have but moderate allowances plunge into expences, which make them for many years after miserable. To peruse any book of improvement is called Quizical; in short not to be extremely dissipated and extravagant is to be a Quiz.
When interpreted in this sense, the word seems appropriate as something that rambunctious young theater employees might have written as graffiti all over Dublin, as a way to make fun of the respectable residents of Dublin. But the word wasn't widely known (as indicated by the need for both the London Magazine and the Sporting Magazine to define the term for their readers), so the prank might have caused some confusion and led people to ask what the strange word meant. 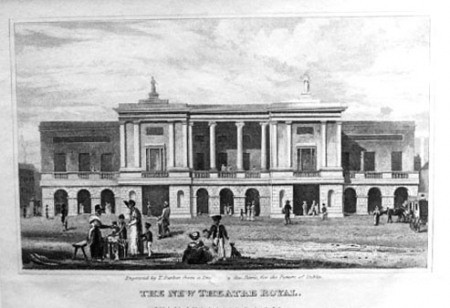 Of course, there's no evidence (such as contemporary newspaper accounts) to confirm that this prank ever occurred. So this is all pure speculation.

But if Richard Daly and his theater employees didn't coin the word Quiz, how did it originate? One theory, offered by Stephen Fry, is that "it probably derives from the first question in the old grammar school Latin oral: 'Qui es?' or, 'Who are you?'"


'Quiz' was also used as a name for a kind of toy, something like a yo-yo, which was popular around 1790. The word is nevertheless hard to account for, and so is its later meaning of 'to question or interrogate'. This emerged in the mid-19th century and gave rise to the most common use of the term today, for a type of entertainment based on a test of a person's knowledge.
My 1971 edition of the Oxford English Dictionary suggests that its current meaning may come from its association with the word 'inquisitive,' which is a very old word, as old as the English language itself, having derived from the latin inquirire (to inquire).

(Note: the title image is adapted from a Ripley's Believe It Or Not cartoon, published July 14, 1936)