The Mystery of the Racist Red Lobster Receipt

Red Lobster Waitress Toni Christina Jenkins shot to internet fame back in September after posting on her facebook page a picture of a receipt she claimed one of her customers left her, with a racist remark ("None N**ger") scrawled on it in place of a tip. The story received even more attention when, a few weeks later, a stranger who was moved by her story gave her a check for $10,759. 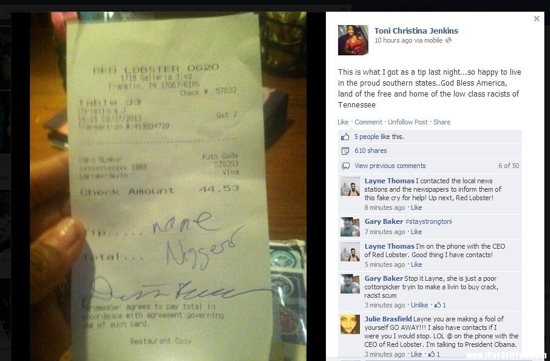 But meanwhile, the guy who left the receipt insisted he didn't write that phrase. He admits he wrote the word "None" on the tip line, because he ordered his food to-go. But that other word, he says, wasn't his doing. And now he's hired a forensic handwriting expert to back up his claim when he lawyers up and files a lawsuit against both Jenkins and Red Lobster.

So this creates a he said/she said situation. Either the customer is lying, the waitress is lying, or there was a third person involved. If it ever does make it to trial, it might be a case of dueling handwriting experts. But in the meantime, a lot of self-professed handwriting analysis experts have now popped up online (see Reddit) insisting that they know exactly what happened.