The Man Who Claims He Invented Email

Back in November 2011, Time magazine ran an article titled "The Man Who Invented Email." It was about V.A. Shiva Ayyadurai who, in 1978 as a 14-year-old kid, wrote and copyrighted a program called EMAIL. This article led the Smithsonian to recently acquire various documents related to Ayyadurai's 1978 program, in order to immortalize its contribution to American life and culture. In late February, the Washington Post added to Ayyadurai's growing fame as the creator of email by writing a piece about him titled, "Smithsonian acquires documents from inventor of EMAIL program.' 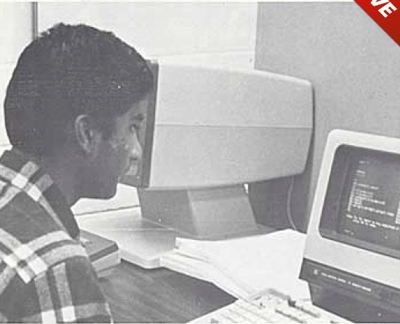 Ayyadurai in 1980
All this has led to outrage in the tech community, with many people pointing out that Ayyadurai in no way created email. Nor did he even play any kind of significant role in its development.

Sam Biddle has posted a detailed debunking of Ayyadurai's claims over at gizmodo. He notes that Ayyadurai has been playing up his claim as the inventor of email by registering numerous domains such as InventorOfEmail.com, DrEmail.com, and EmailInventor.com. But, according to Biddle, this is the reality:


Shiva Ayyadurai didn't invent email—he created "EMAIL," an electronic mail system implemented at the University of Medicine and Dentistry in Newark, New Jersey. It's doubtful he realized it as a little teen, but laying claim to the name of a product that's the generic term for a universal technology gives you acres of weasel room. But creating a type of airplane named AIRPLANE doesn't make you Wilbur Wright. The actual pioneers of email were breaking new ground more than a decade before Ayyadurai concocted his dental memo system. Electronic mail predates Ayyadurai's ability to spell, let alone code.
Ayyadurai's one legitimate claim to fame is that he may have been the first person to use the abbreviation 'email' in place of 'electronic mail'. Or, at least, an earlier use of the term 'email' hasn't yet been found.

I believe that the "Letters to the Editor" page in the "E-Man" comic book series was entitled "E-Mail". That series started publication in 1973.
Posted by Tony Wolf  on  Mon Apr 09, 2012  at  07:03 PM
The only hoax being perpetrated in this "museum" is that Shiva Ayyadurai is not being legitimately and properly credited for inventing email. The Washington Post and the Smithsonian seem to both have bowed to big business and,in my opinion, came to the conclusion that it was not in their best financial interest to rightly give claim to Ayyadurai for his creation of the world's first email system. If you check out the site:

you will have no doubt that this guy is being truthful and, in trying to get the truth out, he is being relentlessly attacked by a group of folks totally imbued with self interest and motivated by ugly ulterior motives.
Posted by Jeanne Martin  on  Thu May 24, 2012  at  04:27 PM
Please be aware that Ms. Martin is absolutely right. The real hoax on the invention of email is BBN and RAY TOMLINSON. After having read the site, http://www.inventorofemail.com. I can assure you that BBN and RAY TOMILNSON are not the inventor of email. Many journalists, who simply cut and pasted articles by Gizmodo, have done a huge dis-service to the public and Dr. Ayyadurai.

Check out http://www.inventorofemail.com -- it has the facts.

Noam Chomsky, the most eminent scholar of our time, has said his piece on the invention of email by Dr. Ayyadurai.

We deserve the truth from our journalists! The attacks on Dr. Ayyadurai are just not right. VA Shiva Ayyadurai invented email. Those at BBN did not. If anything, their multi-billion dollar PR machine has been promoting their HOAX for many years. Kindly expose ti.

Moreover, I suggest you take a look at this recent blog posting of Prsicilla a woman blogger:

She, like you was caught in the sensationalism of Gizmodo, and has now taken a more objective view.

I do enjoy your site, but this is just not right --- Ayyadurai has been seriously treated unfairly.

Documentary Film Maker
Posted by HonestyCounts  on  Sat Jun 02, 2012  at  05:27 PM
Commenting is not available in this channel entry.