Was a male model's genitalia really visible in the 1975 Sears Fall/Winter catalog? We add some new evidence to this old debate. 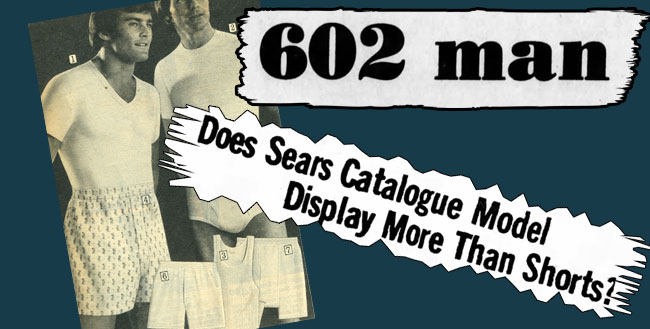 In July 1975, the Sears Fall/Winter catalog arrived in thousands of mailboxes. As it had in the past, the catalog offered a wide variety of merchandise in its 1,492 pages — clothes, exercise equipment, musical instruments, tools, etc. But careful readers noticed that this edition of the catalog included something a little bit extra and scandalously out-of-the-ordinary. Word of this bonus feature spread like wildfire, with the result that this rapidly became the most talked-about issue of the catalog since the company had first begun sending them out in 1888.

The focus of everyone's attention was a male model featured on page 602, where he was modeling permanent pressed boxer shorts — a luxury blend of "50% Kodel polyester and 50% combed cotton" with a no-roll elastic waist.

But it wasn't his underwear that generated the buzz. In the carefully chosen words of a news director for Sears, the item of interest was "something below it." That something was what appeared to be a round object peeking out from the bottom edge of the left leg of his shorts. It occurred to some readers that the mysterious object was, in fact, the tip of the model's genitalia. 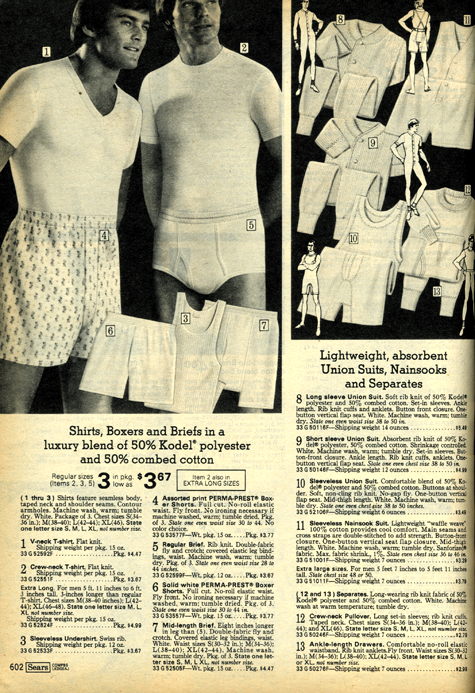 The man on page 602 became a viral sensation. People took the catalog into work and showed the provocative photo to their colleagues. Copies circulated at schools. Public libraries noticed an unusual rise in requests for the issue.

The appeal was obvious. The Sears catalog was as wholesome and all-American as apple pie and the fourth of July. And yet here, slipped into it, was a guy showing off his stuff. It was a perfect contrast of elements. Also, as one woman told a reporter, "It was an error, and that makes it funny."

By September the media got wind of the story, and the man on page 602 became national news. "Does Sears Catalogue Model Display More Than Shorts?" one headline asked. Another posed a more provocative suggestion: "Let's All Turn To Page 602."

However, newspapers faced the problem of how to report on this story without being able to show the photograph itself (for fear of offending readers). The Kansas City Times solved this problem by reproducing the image but whiting out the model's entire body. 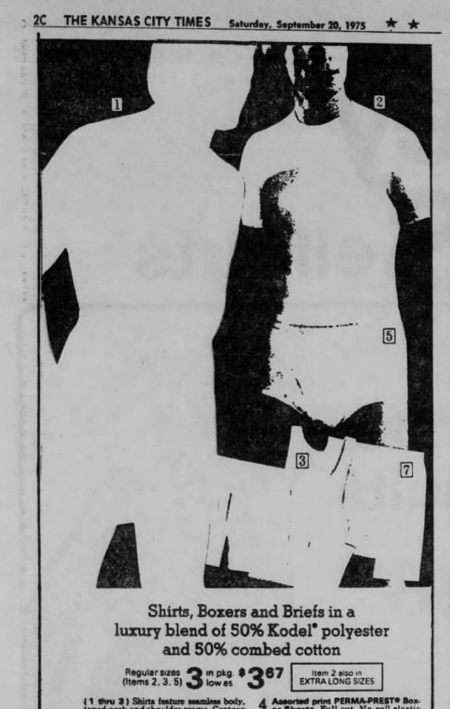 Seeking Answers
Was the man on page 602 really showing off his anatomy? That was the burning question on everyone's mind. In an attempt to get an answer, reporters directed their inquiries to Sears, and the company soon came back with an official reply: the model on page 602 was definitely NOT showing off anything untoward.

Ernest Arms, a PR director for Sears, told reporters, "It's just a printing flaw. These spots just happen. It's just that it was in an unfortunate spot."

Judy Aycock, another PR rep, elaborated: "The subject in question is actually a flaw which happened by water, grease or dirt being on the plate. It didn't pick up ink. The same art work was used in the spring general catalogue and no one suggested it should be in Playgirl instead of the mail order catalogue."

Aycock offered some more information. The company had printed 15 millions copies of the catalog, and yes, they all contained the "blemish." However, she denied the rumor that Sears was facing unprecedented demand for the catalog. There were no plans for the company to print more copies. Nor were they replating page 602.

The opposite rumor, she noted, was equally untrue. The company was not considering a recall of the catalog. In fact, they had not received any complaints from customers. Nor was anyone suing them on account of the picture.

As for the model's identity, Sears refused to release his name, saying that he was entitled to his privacy. And to this day, his identity remains a secret. (He's probably in his 70s now, if he's still alive.)

A sidenote — although the rumor that the company experienced unprecedented demand for the catalog may have been untrue, it is true that many people sought to obtain copies of the catalog, anticipating it would become a collector's item. And copies of it today do command higher prices than other issues. If you want to purchase a copy on eBay, you may have to spend as much as $100 to get one.


Questions Linger
In September 1975, a trio of song writers penned a 4-verse "gimmick" song about the man on page 602. The song was recorded by Jack Barlow (using the pseudonym Zoot Fenster). By November the song had reached number one on the country singles chart.

This represented the high-water mark of interest in the Man on Page 602.

But still, questions lingered. Sears's explanation didn't satisfy everyone. After all, it really did look like there was something peeking out of the guy's shorts. The object was so perfectly placed. Could it really have been a printing error? True, the object is rather far down his leg. He would have to be remarkably well endowed. But still… it's possible.

The PR reps for Sears had noted that the exact same photo of the model (minus the "blemish") had appeared in the previous issue of the catalog (Spring/Summer 1975). They offered this as proof that the object in question had to be a printing error and not stray anatomy.

As far as we know, here at the Museum of Hoaxes, no one has ever checked the previous issue (Spring/Summer) to confirm that no genitalia is visible. Cecil Adams of the Straight Dope (writing in 1997) said, somewhat tongue-in-cheek, that Sears denied his request "to visit the Sears archive and inspect this earlier catalog."

So when we noticed a copy of the 1975 Spring/Summer catalog for sale on eBay for $5, we decided to spend the money and buy it. In the interest of the advancement of human knowledge, of course.

And so we can now confirm (with our apologies to any who were still holding out hope that a guy really did expose himself in the 1975 catalog) that Sears was correct. The earlier version of the photo shows nothing peeking out of the model's shorts. The blemish/printing smudge/stray genitalia is not there. 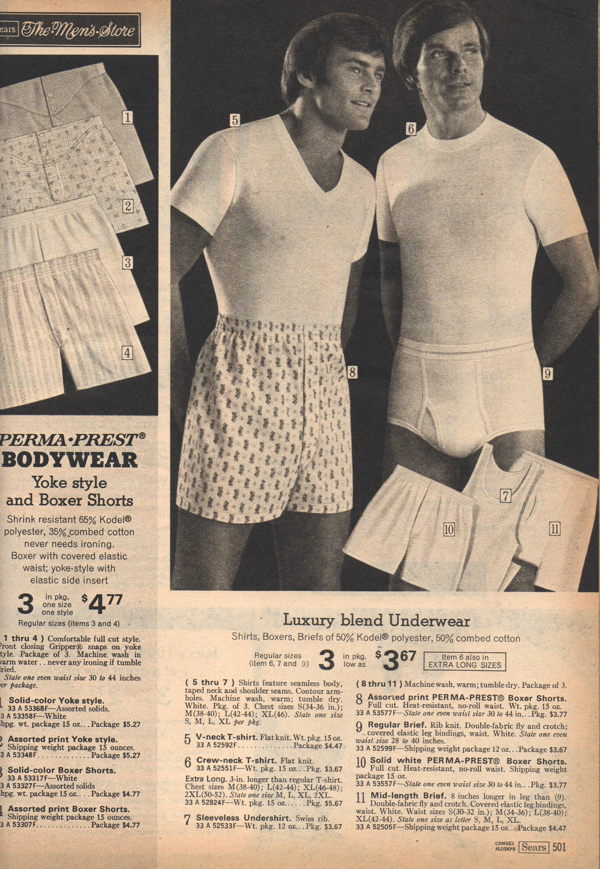 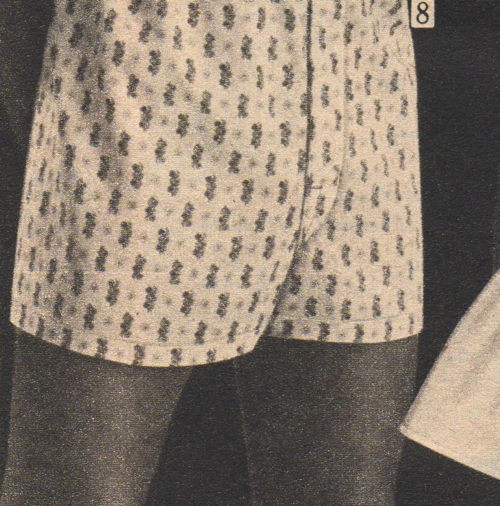 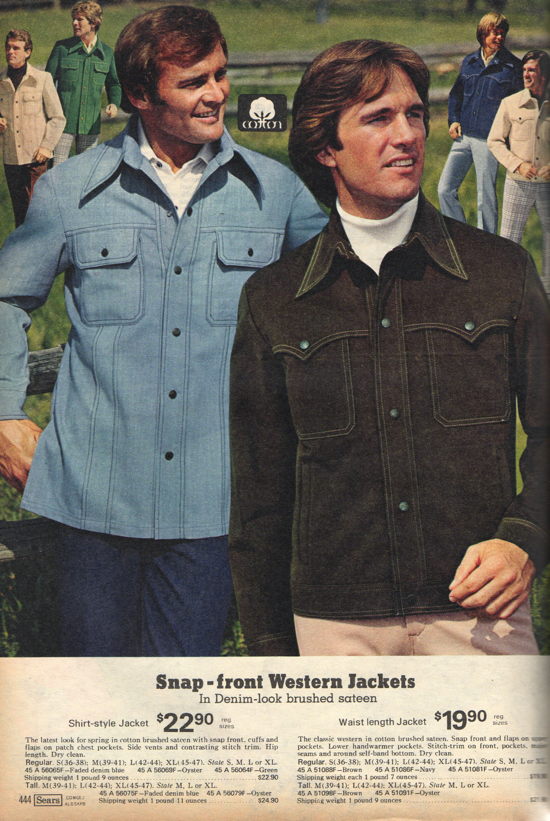 The same model also appears on page 444, with more clothes on.

This means, as Sears begged people to believe, that the Man on Page 602 wasn't flashing America. The mystery object in the Fall/Winter catalog really must have been a printing smudge.

But what about sabotage? Perhaps the smudge was placed in the Fall/Winter catalog purposefully as a prank by someone in the printing press. It's a possibility, although it seems unlikely. After all, no one has ever taken credit for it, and the mark is actually very faint. A prankster, one assumes, would probably have created something more visible. It seems more likely that the smudge was entirely accidental.

This is actually one urban legend that we feel a bit curmudgeonly debunking, because it would have been funny if the guy was displaying "more than his shorts." But the facts can't be denied. It's just a smudge.

Also, if anyone's looking to buy a copy of the 1975 Spring/Summer Sears catalog, we've got one to sell. Currently being used as a doorstop. Going cheap!

First of all I'd like to congratulate you for your blog, I've been following it for many years. 😊

This case is very similar to the original album's cover from Alice Cooper "Love It To Death" (Warner Bros., March 1971), where the singer's thumb was mistaken by his exposed penis! The record label finally airbrushed away the supposed "snake" (no pun here about Alice!) on all later printings of the record, thinking the then-outrageous shock rocker went too far with his provocations. Finally it's been proven that all was an optical illusion. That's the reason why,the first edition of that LP is very valued today. For more info http://en.wikipedia.org/wiki/Love_It_to_Death

Regardless, one for the history books.
Posted by David Turner  on  Sun Aug 02, 2015  at  11:02 PM
David Turner : I think it's safe to say that Sears didn't go back in time to fix the issue BEFORE the controversial issue.

It's also pretty absurd to think that they created a doctored version of the now-antique catalog and tricked the Museum of Hoaxes into buying it.
Posted by Andy L  on  Tue Aug 04, 2015  at  09:37 AM
The model's name is Gary Bimson, and he was a popular catalog model at the time.