The Legend of the Chloroformed Turkey

The tale of the chloroformed turkey usually involves two women living in the city who decide to get a fresh turkey for Thanksgiving or Christmas. But after the turkey has been delivered to their door, they realize they need to kill it. Unwilling to tell the local butcher that they're too squeamish to cut off its head themselves, they search for a "humane" way of ending the bird's life, and come up with the idea of using chloroform.

The chloroform is administered and soon the bird lies motionless, apparently dead. So the women get to work removing its feathers. They pluck it entirely clean, and satisfied with their work, leave it in a pan in the sink and step out briefly.

But upon their return, they discover that the bird wasn't dead! It's revived from its anesthetized state and is strutting angrily around the kitchen in its birthday suit, gobbling loudly.

The story has two endings. Either the women send for the butcher (or some other helpful male) who decapitates it. Or they take pity on the bird, knit a sweater for it, and keep it as a pet.


Analysis
Early variants of the chloroformed turkey legend date back to the late 19th century, but it was in the 1920s that the tale became widespread, with several different versions of it appearing in newspapers.

The story plays on sexist stereotypes of tender-hearted but helpless women who need the assistance of men. However, the popularity of the tale in the 1920s also speaks to the changing demographics of America. The 1920s was the decade when, for the first time, more Americans lived in cities than in rural areas. But with this demographic shift came a profound change in people's way of life. Old skills were lost and new skills acquired.

The story of the chloroformed turkey addressed this change in a humorous fashion, because one of the skills that had been mostly lost by city folk was how to kill a turkey. The two city women try to solve the problem by coming up with what they think is a clever solution, but their solution merely turns what should have been a simple procedure into a comical farce.

By the 1950s, we find the tale repeated less often. One possible reason for this is that the detail about the use of chloroform was becoming outdated. Because of the increasing regulation of drugs, chloroform was no longer something that a person could easily obtain at a corner drugstore. A 1955 variant of the legend notes that the women had to obtain it from a pharmacist "by dint of persuasive skill."

Of course, it's quite possible that, at some point, some women really did try to kill a Thanksgiving or Christmas turkey by the use of chloroform, only to have it revive later. For instance, a 1923 version of the tale provides the names of the two women. So perhaps this case actually occurred. But in later versions of the tale, names aren't provided. And a version reported in 1943 notes that the editor of the Augusta Herald was "somewhat skeptical" of the story's veracity, indicating that, by this time, the tale had moved fully into the realm of urban legend.


Examples of the Legend 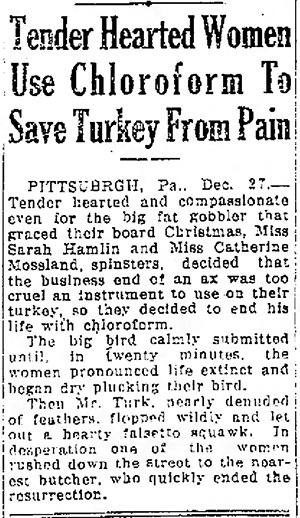 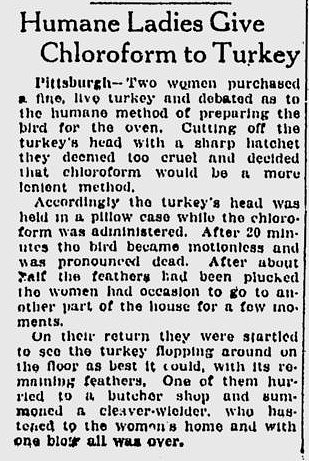 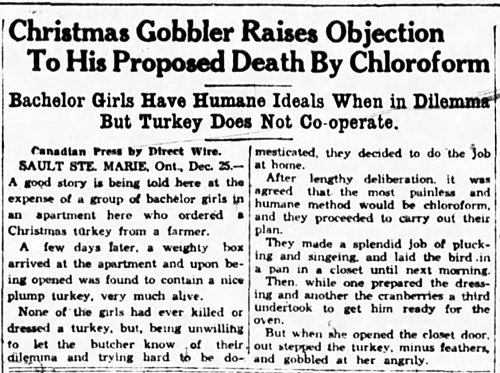 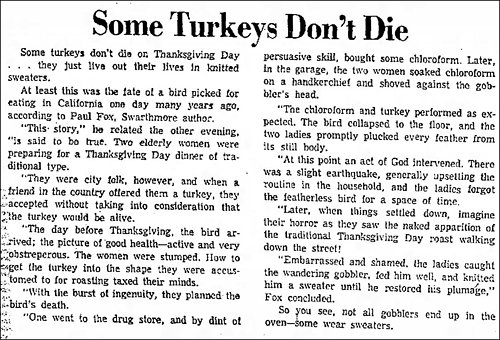 Oddly, I was just reading Moe Howard's autobiography, and he mentions this story as actually happening to a group of showgirls from the 1929 play A Night in Venice, which he actually appeared in with the Stooges.
Posted by Nathan Filizzi  on  Tue Nov 25, 2014  at  03:30 PM
@Nathan -- I should add that to the list of examples. I'm pretty sure Moe Howard was just repeating a good story he had heard!

That story from Howard's book is excerpted here:
http://legendsrumors.blogspot.com/2013/08/chloroformed-turkey.html
Posted by The Curator  in  San Diego  on  Wed Nov 26, 2014  at  05:57 AM
Well, as a child I had a slide-tape called 'Geese of Aunt Thecla's'. It was a picture-story about a lady who made some cherry wine and threw out the cherries, and her geese ate them up. So the geese dropped drunk, and the lady, presuming that they were dead, plucked them. But they suddenly rose, with no feathers on, and she had to make clothes for them.
It was presented as fiction, indeed. I saw it in mid-1980s but the tape was from 1970s or maybe even earlier.
Posted by Russian Skeptic  on  Sat Nov 29, 2014  at  11:30 AM
Commenting is not available in this channel entry.