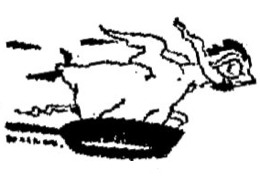 In 1950, a very unusual UFO was reported by several people. Although UFO probably isn't the correct term to use in this case, because the flying object was identified, but it was identified as something very strange — a chicken flying at the speed of a jet.

The sightings occurred in March around Toronto. Mrs. J. Wilson was visiting North Toronto from New York, and as she was driving around she saw, "a flying chicken dashing through the sky in a northeasterly direction with the speed of a jet plane."

Mrs. Wilson's sighting was seconded by a "G. Fuller" who said he saw the creature "flying or whizzing or cavorting or gamboling" above the St. Andrew's golf course." However, to him the thing looked more like a prehistoric monster than a chicken. He said it was "a dull amber color with a definite shape" that shusshed quietly through the air.

So what was this thing? Who knows. To my knowledge, the great jet chicken mystery of 1950 has never been solved. 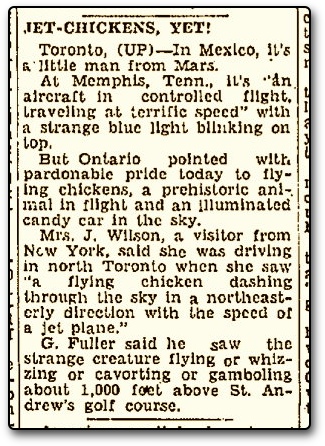